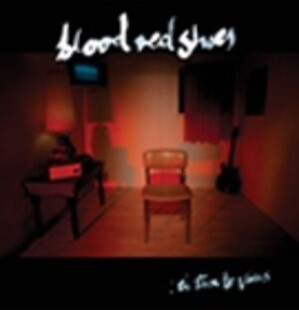 This is the third album from Blood Red Shoes, but the Brighton duo first appeared around 2005.

If my memory serves me correctly, they had stuff out on Johnson Family Records, but that might be total balls. Anyway, I remember them getting signed to a 'real' label and I'm glad they are still going strong.

They seem to have grown from their punkier roots, but still have that cool edge. They certainly make a really good noise for two-piece. All big chops and cool vocals from both Laura-Mary and Steven all the way through the album.

At a push I'd say it sounds like a cool, bluesy take on 90s indie, but has some heavier elements bubbling under there too and its thoroughly diverting stuff. Steven was of course in the excellent Cat On Form who you can still hear the ghost of here, if you can, track down some of their stuff, its pretty legendary in the right circles, all yelps and screams, lovely.

This album moves from the vicious and barbed to the ambient and restrained and its a real journey you go on from start to finish. The drums clatter away on tracks like 'Two Dead Minutes' but back away at points to let the guitars to the talking. The laid-back 'Silence and The Drones' has plenty of space and by the time it takes off fully, it's a launch into space and sounds amazing.

The producer is Mike Crossey, who has worked with the band before as well as Sheffield's very own Arctic Monkeys and the once-amazing Foals. You can tell he is involved, the sound maintains a warmth in tone while still allowing the guitars and drums to sound like a proper garage band, not like a band that's been killed by the studio treatment.

What you should take away from this record is the irresistable cool it harbours, this is the sound of a band seasoned by endless touring who seem to have made an album free from interference and have made it their own.