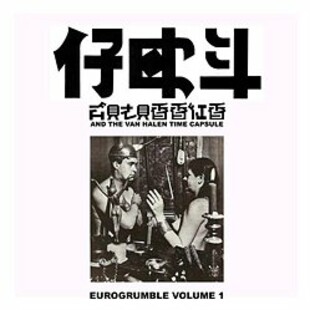 How's that for a bizzare title? And apparently its meaning is only known by the band themselves, great!

HC have perhaps released their dirtiest-sounding album yet, I know it must seem I've said that before, but really, what a horrible audio mess.

This vinyl-only and brilliantly-packaged release is their umpteenth (seriously prolific band with more to come no doubt) and seems to feature, as well as the band themselves, a cacophony of film samples, radio snippets and all manner of industrial clanging, all set to 'stun' as it transpires.

The songs meld even more than usual into a thick viscous gloop, and the vocals range from grumbles (get it?) to black metal screeches, to what can only be described as tramp-babble, all wonderfully manipulated with what must be rust-encrusted pedals that smell a bit.

The usual jam-style songs play themselves out like Indian ragas filtered through horrendous amounts of fuzz, but it's all for the best as it sounds great, as hypnotic as they've ever been and full of vim and vigour. I can only imagine how satisfyingly horrid this will sound live.

One day, HC will surpass themselves in terms of how filthy they can get and that record will sound like Wolf Eyes, enjoy them before it becomes unintelligible.