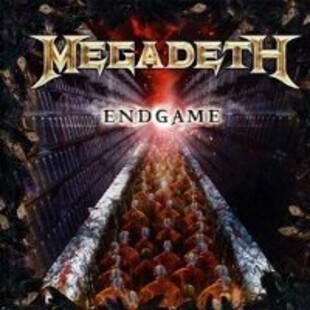 “I’ll shred when I’m dead”. Those are the foolish words I uttered to my brain after listening to Metallica’s St Anger. I had gorged on thrash too much, I was beyond thrash, and it was time to leave the hall.

Recently I have returned and have been dipping my sweet, sweet toe into the realms of thrash, just to see what’s going down in thrash town. I purchased the Hospital of Death album and rejoiced at the merriment and shredding contained within. Then the ‘tuther day a work colleague of the thrash persuasion informed me that the new Megadeth album had just got 9.5 out of 10 in Terrorizer….eh? Surely that means it’s on par with Led Zep 4 or Black Sabbath’s Black Sabbath or Hip Hop Electro 12?

After days of deliberation I decided to give it a listen. Cradling the compact disc in my hands I turned it over and was greeted with an image of Mad Mustaine brandishing his axe of thrash while doing something insane with his lips. Perhaps they are thrash lips? Who’s to say? I’m not going to tell the man who wrote HOLY WARS what to do with his lips.

So what does it sound like? It sounds like the ‘deth, it sounds like thrash, it sounds like Mad Mustaine whining over tasty thrash riffs. The real winner on the CD are the solos, man do these boys love their solos. They love their solos so much that the first track “DIALECTIC CHAOS” is a bunch of solos, yeah a bunch of solos, love it don’t ya? The inlay card lists who’s doing what solo so when your stood with your legs splayed and shredding the Jesus out of your thrash axe you know what face to pull. Solo 1 is delivered by Mad Mustaine so get those lips ready you dirty thrash dogs.

“THE RIGHT TO GO INSANE” by thrash standards is a bit of a plodder (up until the solos of course) and what really grinds my gears is the fact he gives a songs such a delicious name yet he fails to let the song go insane, what gives. Mind you he is insane, he’s Dave Mustiane, leader of the ‘death.

So what else to say? Well “THE HARDEST PART OF LETTING GO….SEALED WITH A KISS” is a brooder, the ‘deth already have an awesome brooder in their thrash cannon in the form of “IN MY DARKEST HOUR”. Sadly this brooder is nowhere near as good, it’s ok but not vital. I suppose that’s what’s it all about.