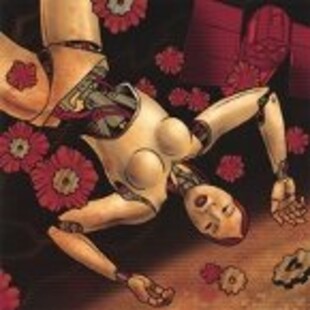 Maybe I’m getting old but I really don’t get this release at all. On the one hand it does have some real plus points. The first thing that grabs you is the packaging, immediately this looks like a band at the top of their game with a real eye on presentation. As this is self financed these guys are either rich middle class kids who have tapped mummy and daddy up for some money or these guys have put everything into this release and are sleeping on people’s floors!!! It’s also impossible to deny that this is a talented trio of musicians… technically they’re absolutely smoking and the production job here is faultless being big, bright and punchy. Also having a drummer named Buffalo you’d think would be a major plus point in itself!!!

Ultimately though, as well as you may package and produce a release, it’s the music that counts and this is where this release really does let itself down for me. It’s almost impossible to assess where these guys want to go or what they want to be. This would appear to be some sort of concept album…what the concept is I’m not too clear but it may have some sort of nihilistic, apocalyptic overtones…of course we’ve never seen that before!!! Initially things seem promising as the album kicks off in a decent driving rocker style sounding equal parts stoner and punk rock. It’s not jaw droppingly amazing but it isn’t bad. Alas, any goodwill is short lived as the album descends into an incoherent torrent of spastic riffs and disjointed drumming capped off with some truly appalling emo type yelping. The song structures don’t really seem to hold together in any sort of cohesive fashion and the album flits through styles from hardcore to prog via its sloppy post hardcore umbrella with breakneck confusion. Occasionally a riff will rise above the melee and grab the ear but it sinks below the surface again almost as soon as it appears.

Maybe it’s a taste thing. Maybe to someone schooled in overly-complex-for-its-own-good type punk/metal/post hardcore this album would represent the cutting edge of modern heavy music but to me…it’s a mess. I normally like to spin an album a few times before reviewing it to allow to unfold its secrets…I struggled to play this once all the way through without it setting my teeth on edge and, frankly, getting on my tits. Still, the drummer is called Buffalo which has to count for something right?