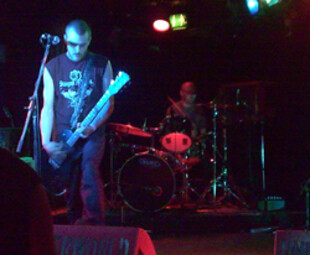 Rachmanite are Tom on guitar and Podge on drums. no one sings. we like them.

I must confess now that I am not the biggest fan of the trad Sabbath worship furrow of doom ploughed by bands such as Olde Crone. However, I'm also not a massive fan of throwing bands into furrows of doom such as the trad Sabbath worship one. There seems to be a little more at play here than that and besides, these ruts are created for lazy idiots like me by lazy idiots like me in order to compare a thing to other stuff and then say there's too much of that kind of gash about and it was much better first time around. 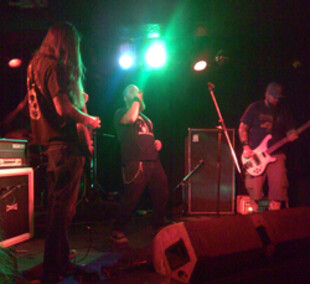 Granted, the riffs are treacle thick and the beards are, indeed, enviable but there's something meditative and tribal about the performance. The driving groove that usually goes hand in hand with this kind of music has been replaced by pounding toms, more in keeping with bands like Swans. Nodding and claws are replaced by a mantra-like contemplative calm with each member locked into the trance inducing barrage of sound.

That's not to say that heaviness is waylaid - far from it - but there's enough breathing space for a seam of psychedelia to muscle it's THC drenched way into the proceedings. It's not the cliched sitars and moustaches psychedelia either, but more a tip of the titfer in t'direction of the intellectualism and idealism that accompanied the first wave of experimental bands that emerged in the mid 60s. In all, an unholy crushingness tempered by more "out there" tendencies makes one wonder what the future holds for fans of this band.

[img "/incoming/alldayer-cc.jpg "right" ""]I heard about Cherry Choke due to the connection with Josiah whom I have seen live several times and have always enjoyed. Matt from the aforementioned band is the front man for this new project providing guitar and vocals. So what did they bring to the day?

In the landscape of stoner, doom, sludge, whatever categories that ninehertz represents Cherry Choke fit as a cross between the stoner and whatever category. This 'whatever' is a good thing in the case of Cherry Choke as they manage to combine a slice of late 60's garage rock and psych and actually sound like something off a Nuggets collection which in my eyes is no bad thing.

This is a three piece band as they should be, a proper pounding rhythm section with fuzz laden guitar, plenty of volume and above all a good ear for a melody. When I say melody this may bring the dreaded word 'pop' to mind but in this case it's a reminder of when pop was interesting, lively, daring and bands like the Jimi Hendrix Experience could actually appear on top of the pops and blow minds.

Cherry Choke pulled out the stops for this gig and I'm sure will do for many more to come. Kneel down and bath in the fuzz.

A Horse Called War (by Podge)

I've never seen AHCW before, now this may seem odd considering I released their CD EP [on Calculon Records] but they were more than strong enough on their demo for it to make an instant impression, they were also the only band i saw all day being chief distro man and merch monkey.

Hitting the stage they looked like red necks let out for the day and loving every moment of their free time by spewing some of the harshest and filthiest music this fair isle has seen in a long time. What surprises me (in a good way) with this band is that they have never really been tagged with the "monkey-lite" marker, something that other bands haven't been so lucky with in the past. Maybe this is because they have slipped under everyone's radar, but my own preference is that they are actually on par with the heads of the scene, but hey, maybe I'm biased, why not check them out for yourselves?

Kicking off with Ruined Everything, it's full swing all the way, feet on monitors, guitars aloft and arms flailing. It's all feedback and violence on your ears, what your mum and work collogues file under "just noise" but a glorious noise at that. 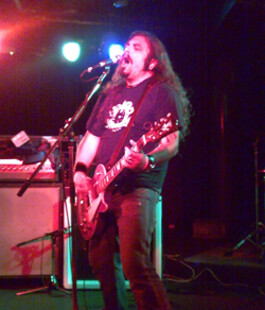 Opening with your best song is always a bold gambit, but Grifter care not for such superstitions and rip into fan favourite 'Sweat Like Horses' like it's prime time on a Saturday night. With its driving verses, and that anthemic chorus, all that's missing is the horse mask. Grifter easily get heads nodding, feet tapping and fingers pointing with their infectious southern fried boogie, which isn't bad for an early slot at tea time on an alldayer. Hell, they even get a dose of audience participation into the set, instructing the eager crowd to provide some handclaps.

The trio power their way through a short set, including some unreleased songs which show the quality levels of their songwriting is not diminishing either. Top stuff indeed, as this is just the kind of thing to get you drinking beer and raising hell.

End of Level Boss (by Hopkins) 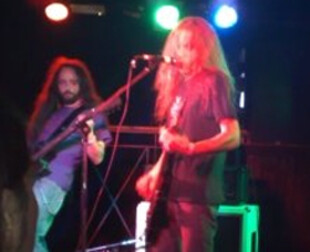 Harry and company have the difficult job of going on before Gentlemans Pistols, but End Of Level Boss pass their test with consummate ease. A dose of prog riffery and rhythms isn't usually the magic ingredient needed to bring the party to a gig, but when added to the quartet's grinding heavy groove, it's the icing on the cake.

Sounding like the bastard offspring of early Alice In Chains and Kyuss, with Voivod as the bearded cape-wearing midwife, EOLB crank out an intense half hour of speaker rattling, whilst the audience cower before them and worship the almighty riff. Frontman Harry has the crowd in the palm of his hand, demanding hails and raised beers aplenty in honour of ninehertz and all those involved in the day's events. 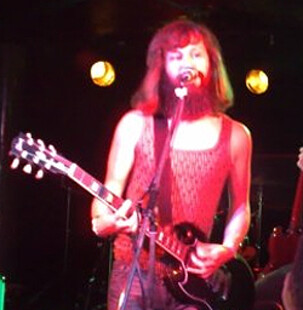 "I've not seen Gentlemans Pistols before, are they any good?" a friend of mine remarked before the Leeds quartet hit the stage? "Are they any good" I thought to myself? No, they're bloody geniuses. It takes something truly special to attempt original classic rock influenced songs and avoid the sixth form-esque fumbling and ham-fisted harmonized guitars that infest the toilet circuit, but these guys along with bands like The Freezing Fog and Trebuchet seem to have that knack of taking the best bits of all the classics and hammering out something fresh and original sounding.

Gentlemans Pistols have it all, catchy riffs, a glam stomp, the moves, the looks, tongue in cheek lyrics about wanking and heavy petting, and 4 blokes playing their instruments with such ease, it like they could do it with their eyes shut. If you close your eyes, it's like you've been transported back to the golden era of the late 60s and early 70s, but your nose reminds you that you're in the Camden Underworld.

(Apologies to White Fang who were on second - it's too far in the distant past to remember what you were like, but I bet you were great.)