Gorse The Slumber of Artemis EP 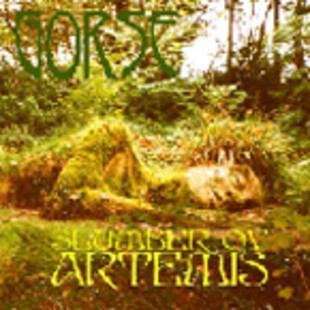 Imagine, if you will, a scuzzy Chicago/San Francisco dive with bits of wee on the walls and piles of sick on the floor. Steve Albini's at the bar, haggling over his Cinzano and soda; Cows' set just ended and you're waiting for Hammerhead to finish setting up. Yup, this is scuzz in a good, old fashioned, scabby AmRep (Amphetamine Reptile Records) style. Having heard frontman James' previous band's treacle thick sludge onslaught, this was not what I was expecting to hear at all.

As the tweeter-raping opening riff of "Tarantella" fills the room, it becomes immediately apparent that this is a far more brittle and abrasive offering than is normal for the average sludge/doom/stoner band. There are certainly elements of Sabbath and St Vitus thrown in, but it is very deftly tempered by an early 90s alt. rock sensibility, displayed in the massive Iommi-esque riff about 4 minutes into "10 Years" which dies into a harsh Pavement-on-meth/early Today Is The Day jangle.

This sandpaper rough sense of twisted melody permeates the length of the record and serves to puntuate juggernaut riffs and compliments James' angry-pissed-bloke bellow (He seriously sounds like the bloke from X at times). When not being sensitive and whimsical (ok, ok, the quieter, less shouty, more sinister bits), and they hit their jagged, lurching groove, Gorse sound fucking HUGE. Shards of open-string sparkle serve only to make the listener feel lacerated, as well as the subject of an unwanted stepchild style beating. Certainly not nice. In fact, nothing about this release is nice. It's fucking ugly sounding. If amps had a custom "unpleasant" dial, Gorse would have maxxed it out, naturally.

Which is fucking brilliant really, isn't it? We live in an age where extreme music in all it's forms as been identified as a cash cow and sanitized enough for popular appeal but not enough to make your parents dig it. That's Coldplay's job. Kids listen to this guff and form bands that sanitize and censor themselves by default before they've even played a note. It's fucking great to hear a band that sounds like a shit-stained, oily rag among the silky, silky scarves.

Records like "The Slumber of Artemis" are rare beasties these days. Beautiful in it's belligerence and brittleness; it's ugliness and it's tendency to lash out. Gorgeous stuff.

I fucking love it. It's coming out on Calculon in early/mid November. Definitely pick this one up.

Forums - Reviews and Articles - Gorse - The Slumber of Artemis EP