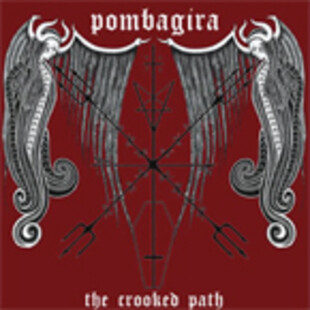 In a nutshell, Pombagira are a London based two (sometimes three) piece playing heavy as fuck, early Electric Wizard style doom. Or rather, they are when they aren't fucking about.

The main problem that I have with this two disc low end rumble machine is that Pombagira appear to be just that little bit too greedy for their own good. Everything you'd want from this style of music is here in spades from the stupidly heavy guitar and bass sounds (care of the guitarists apparent obsession with running his amp through as many cabs as possible) to the grooves big enough to ride to work on to the trippy, tokers-delight psych mid sections but oh no, wait... that's not enough for Pombagira. No, they want more.

Now don't get me wrong, I'm all for experimentation in music but to my mind, there should always be a point where a band stops and thinks to themselves "now hang on a minute, are we just doing this for the sake of it...?". Experimentation is brilliant all the time it's not unnecessarily detracting from the main appeal, but unfortunately that's the over-riding feeling I keep getting from this CD. It just feels as if Pombagira are aware that their style of doom is considered perhaps a little staid these days and as such keep trying to crowbar light/dark dynamic bits in and various other more forward thinking doom styles, achieving little more than making you wish they'd just keep ripping out that fat fuck-off groove they were rocking your world with six minutes ago before they started tarting about so much.

Song duration itself is also a fairly serious issue here and again feels like the band are trying to ape the more progressive bands of their field for extra cool points. The two CDs are comprised of three songs and two songs respectively but could have easily been boiled down into one cd of about ten songs of a sensible length without all the pointless (and often FAR too long) filler and I for one would have been much the happier with the result.

You know how the Top Gear presenters are always joking that their motto for the show is 'Ambitious but Rubbish'?, well that's a little harsh for what realistically is an impressively heavy and well written doom album but the sentiment itself fits perfectly. Perhaps if Pombagira didn't care quite so much about what other people thought about them then they might remember to concentrate on what they're really good at and produce some truly superb bowel rending entertainment treats for us in future... fingers crossed.