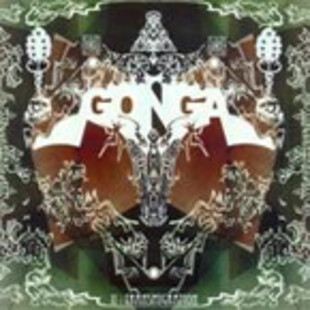 At long last it's here. The second album proper from Gonga. It's been a turbulent few years for the boys from Bristol and it may sound cruel, but if 'Transmigration' is the result of such turbulence then maybe it'd be worth purposefully setting some crafty hurdles in the band's way before the next record. Overcoming the various difficulties seems to have given them a hunger and a creative spark that has resulted in an album so close to magnificence, but more on that in a moment.

For those of you unfamiliar with Gonga what can you expect? Well the self titled debut and the 'Under The Trees' EP/DVD combo would suggest a slightly trippy, but solid and groove packed traditional Stoner Rock unit. So, as I popped 'Transmigration' in the stereo I was prepared for more of the same. That's in no way meant in a derogatory manner as I have thoroughly enjoyed the previous discs with the accompaniment of a few beers and some errrr, herbal relaxant. So I was pleasantly surprised when the opening track 'Knight Thyme' came at me with a slightly more menacing tone. Did Gonga get mad? The guitar tone sounds delightfully thick and with a deep tone usually reserved for the heavier end of the Stoner/Doom/Whatever spectrum. So far so good. Then the vocals come in and it locks into a hypnotic crawling groove with a kind of melody married to the sheer heaviosity that a lot of bands would kill for. Sweet.

Nearly nine minutes later and we're on to track two 'Wytch Hande', an opening sample that wouldn't sound out of place on an Electric Wizard record leads into an almost Queens Of The Stone Age slow burner of a song. Queens Of The Stone Age?!?! I hear you cry. But they're rubbish/sellouts/never any good in the first place. You're wrong. But that's for another time. The comparison comes in the feel of the track and the subtle vocal harmonies and melody. It's still as heavy as a really heavy thing, but a really heavy thing wrapped in velvety smoothness. Track 3 'Stetogeo' ups the pace somewhat with a riff to die for but at just over the halfway mark its pace is tempered with a great percussion led middle section that bubbles along quite nicely. This is followed up by the introspective guitar pluckings of 'The Room Of Unhallowed Rites And Alchemies', a palate cleansing short instrumental piece. Then we're back to the QOTSA-isms of before with more fantastic vocal harmonies over the good midpaced stomper 'The Greaser'. Nice use of wah on the guitar and some great drumming propel this tune to it's climax. 'Sandstorm' starts in a deceptively calm and low key manner than after a minute or so kicks into a massive chugging groove that will soundly kick your arse.

Then, for me, it starts to go a little wrong. No, wrong is unfair and I wouldn't want to put you off a purchase dear reader. The problem is, what's gone before has been so sublime that the last three tracks seem content to trade on past glories. 'Sonor Wake' and the rather drawn out 'La Pique' (bookending another slightly more throwaway palate cleaning instrumental) could have sat comfortably on the previous recordings. Which is no bad thing, as I've said, I enjoy the previous discs, but comparatively speaking following the sheer excellence that's gone before it makes me wonder what could have been. One more track in the vein of Knight Thyme or Wytch Hande and a reduced run time could have made this the crowning glory of the UK Stoner/Doom scene. A testament to the Bristol boys tenacity and perseverance in the face of odds that would have made a lot of bands quit.

But I don't want to end on a bit of a downer so instead I will celebrate and raise a glass to one of the finest albums to come from our little corner of this wonderful scene in the last five years. Respect is due.