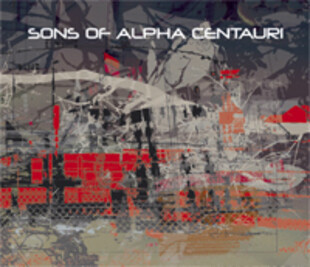 Sons of Alpha Centauri are a band that conjure up images of mysterious spaceships, black holes and the infinite questions that surround space and time. Is that pretentious sounding enough? Well it ought to be, this band set out on somewhat of an epic space quest before you even hear the music, the name of the band, the fact the songs are named in numbers (the numbers are the chronological order in which they were written, hence the order being 2, 14, 15, 26 etc). The artwork is by Seldon Hunt, an artist lambasted for his repetition in style and here it's no different, a pleasant enough looking seascape photoshopped into oblivion, but the inside has a fantastic Braille-esque bumpiness to it that negates the plain cover.

Onto the music then, what we have here is around an hour of instrumental post rock mixed with a healthy stoner rock influence, some of the tracks, in particular '14', sound like the score to a 70s science fiction film's main battle scene, whereas some of it sounds like Kyuss at their most loose and laid back, a weird contrast between modern and classic styles which really works. Their only problem it seems, is the fact that they tend to repeat themselves, so at around the point that half of the album has elapsed, you are hearing the same themes over and over. It doesn't happen often, but this is a post rock band short of ideas and although the potential is there, this may have been better suited to an EP. What it does have in spades though, is the ability to showcase the bands talent for milking a good riff, at points you can't help but nod your head as they crank the speed and multi-effects to ridiculous levels, good effort but more variety would certainly not go amiss.