A Horse Called War Stumble At Every Hurdle 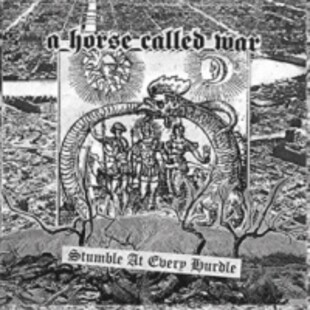 Another sludge band that sound like Iron Monkey and Eyehategod? Do we need anymore of these bands? Well, when they sound as good as A Horse Called War, then yes, we bloody do. The blueprint is familiar, thick dirty riffs ranging from feedback drenched funeral dirges to foot-stomping fist in the air stuff, vocals full of bile and an overall feel that makes you want to cause serious damage to someone, or something. However, rather than sounded like a band treading over common ground, they deliver something that sounds fresh in a genre that can get bogged down in its own swamp.

The most obvious musical comparison would be Charger, as suggested on the review to their previous EP on this very website, as they have that same knack of knowing how far to push a riff or a passage before it gets mind-numbingly repetitive, and some of the doomier moments bring to mind another fine UK band, Lazarus Blackstar. The 5 tracks on offer weigh in at around 35 minutes, which is just right for this style of music, otherwise you find your attention starts to drift. A special mention must go to the final track 'Bodil Joensen' , in honour of the leading lady who featured in a notoroius underground porn film from the 80s called Animal Farm. The track also features the vocal talents of Martin Ives from Charger, and a feedback ridden ending, where the drums and bass carry on the main riff. Textbook stuff.

Another fine release from Calculon, and highly recommended to all fans of sludge.

Forums - - A Horse Called War - Stumble At Every Hurdle