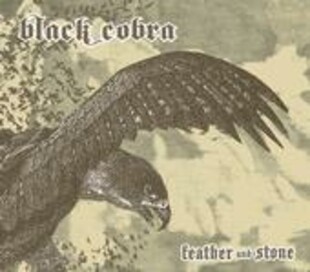 Fresh from relentless touring of the acclaimed 'Bestial', Black Cobra continue their darkened onslaught by delivering another slab of heaviness that will make your sub-woofer woof out its own voice-box.

'Feather And Stone' carries on seamlessly from where 'Bestial' ended; the two-man destruction squad have stuck firmly to their guns and honed their original style. As with their previous work there are occasional surprises, such as the final moments of 'Ascension' with its clean guitar picking and the calmer, moody passages of 'Dragon and Phoenix' yet for a signature Black Cobra sound you cannot contend with 'Red Tide', which involves two minutes of bowel-rending relentless riff-killing.

Another surprise is just how short 'Feather And Stone' is, the eight tracks swoop by like a preying hawk plucking a rodent from the desert floor, leaving you salivating venom all over yourself baying for more. Try to imagine this live, if you were to imagine a duo of cobra-human hybrid going absolutely sick on stage that would be pointless, Black Cobra are superior to mere Snakebrids, they are a lethal combo of unstoppable force, lords of the multi-tempo low-end attack.