Earthless Rhythms From A Cosmic Sky 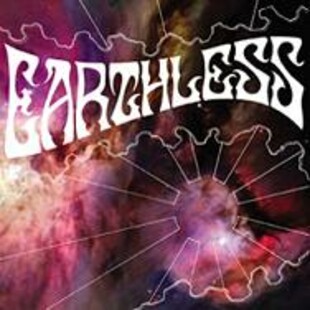 Earthless are a cosmic power trio from San Diego. They're signed to the purveyors of the best US trippy music, Tee Pee, this is their latest album and it's a crazy cool trip! Drummer Mario has been in stacks of bands including Rocket from the Crypt, Hot Snakes and Black Heart Procession. He was also a part of Tony Alva's legendary skate crew. Basically he's a cool fucking bro! He met bassist Mike Eginton and axe-meister Isaiah Mitchell through mutual friends and they bonded over a love of "Japanese hard rock and primitive 60's garage music." As Earthless, they make an awesome blues based noise rooted in the classic 70's Sabbath/ Zeppelin mold but with a primary focus on long, unstructured instrumentals.

Ostensibly a three track album, track one 'Godspeed', is divided into 5 spaceily-titled sections but it's ultimately one mofo of a 21 minute jam out. It starts with a cool three minute psych freak section before tasty drums and a riff punch in and start building up. You can immediately hear the taste and restraint of the band and the interplay between the musicians is fantastic. Pretty soon the - unbelievably well played - lead guitar says hello and comes in and out for the remainder of the track. The overall vibe is a classic, tasteful groovy stoner vibe with a beefy 70's production. If anything, the clarity, rawness and balance between the instruments reminds me of the last sessions Kyuss did before the split - it has a similar heaviness and loose vibe to 'Fatso Forgetso' and their 'Into the Void' cover. Twenty minutes is a long time so what else goes on? Well, at one point early on they break into some decent speed metal riffing and you can expect to hear some clever use of delay sprinkled throughout proceedings too.

The second track, 'Sonic Prayer' (great title!) is broadly similar with another super catchy, simple riff kicking in after 5 minutes of delay and bass groove. They also chuck in some tasty microsynth and backwards guitar to give your ears something to feast on before the galloping, mellow breakdown after 21 minutes (again). They end proceedings with a Groundhog's (an underappreciated late 60's/ early 70's UK blues rock act) cover 'Cherry Red,' that sounds so authentically 70's it's almost ridiculous. Oh yeah, it's bloody catchy too.

Earthless are already established in the psych scene as some of the best and loudest live players and this disc is only going to help the word spread. As long as you don't mind jammy tracks loaded with lead, it's a fantastic purchase and a lesson in space groove.