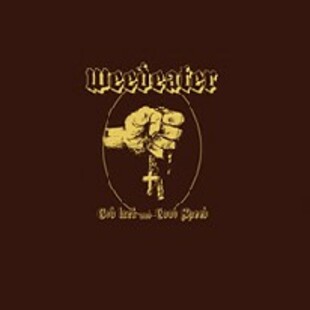 It's taken a while but after all the black metal and art/drone releases Southern Lord has started to go back to it's roots putting out doom records again and with Om's first proper full length comming up before the end of the year, their latest release, Weedeater's 'God Luck & Good Speed' is a good place to start.

Weedeater formed out of the demise of Buzzov-en and its hard to believe that its just three guys producing this huge sound, many bands twice their size never sound this big. For those that have listened to Weedeater before you know exactly what you are going to get. It doesn't stray too far from their previous output but there are some welcome additions to their crunchy sludge© sound all the same.

Kicking off with the title track, we're treated to utter filth coming out the speakers and its bloody lovely. Close your eyes, lift your beer up high, take another drag and let your body sway to the music. Come track three ('For Evan's Sake') you'll be near passed out on the floor hugging the nearest immovable object trying to soak up all the rumbling bass like its the last life force on Earth.

The oddball comes in the track 'Alone' - what's not odd is that it was recorded at a different session and and with different people to the rest of the album - but that it's predominantly a banjo and clean vocals. I can see kids called Billy-Bob and Mary-Joe years from now listening to grandpapy sat on their front porch rocking backwards and forwards singing this to their grandchildren while watching out for 'gators climbing out of the Florida swamps. While not as unusual as 'Alone', 'Give Me Back My Bullets' has to get a special mention. It seems a thinly disguised protest song about America's right to carry arms, but it's also got one of the most catchy and memorable chorus' and you'll be singing along before the track's 4:15 are up.

I think if anyone outside the genre asked for an example of sludge doom, I'd be more than happy to play them this. It's everything a quality record should be, slow, evil, heavy and yet still interesting.