Neurosis Given To The Rising 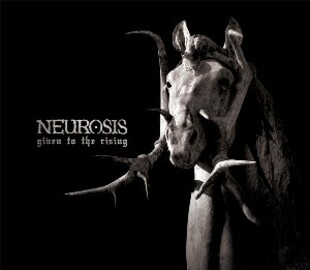 I have to admit having a hard time 'getting' Neurosis as much as most of my metal peers. I always seem to be missing the special spark that makes grown men go all doe eyed when a show is announced and travel 4 hours to London to watch them play. Isis, fair enough, but Neurosis always seemed to stretch ideas a little too far for my liking, and I've failed to understand the depth of peoples love for the band despite giving several albums a decent listen. They tend to meander slightly a bit too often. When they are on form however, they are immense. The 'Locust Star' live performance is the video I watch most on YouTube since they took the Reading festival version of 'Juggernaut' by Cave In down and made me cry like a little girl in the process.

Well they're back with a new album anyway, after promising a return to the older, harsher sound after the (relatively) chilled sound of 'A Sun That Never Sets' and 'The Eye of Every Storm'. And giving it a listen for the first time, something clicked. It could have been a fluke, but after recovering from the stunning 9 minute opening title track, the album seems to live up to the hype people have always given them. The cleaner sounds are still here to some degree but sound more epic and calmer than the claustrophobic passages of tracks like 'Crawl Back In'. Listen to the opening few minutes of 'To The Wind'; almost peaceful. In places, the album is horrible. The familiar dischordant guitars and guttural vocals swirling over churning rhythms make a return it tracks like 'Hidden Faces' and the crushing 'Distill (Watching the Swarm)'.

One thing that struck me was how well the electronic elements worked with the tracks, both backing up the intruments to create dense walls of sound or being used more prominently to provide ambient atmospherics, such as the opening of 'At The End of the Road', the closing of 'Fear and Sickness' or the backing to the spoken word interlude 'Shadow'. The sounds really help to shape the mood of the tracks and it's a wonder more bands aren't doing something similar. For someone like me who is suffering from a slight distorted guitar fatigue at the moment, the keyboards are a welcome respite from the over familiar sound.

The album's not perfect. I found a couple of tracks still ground along to a certain degree, 'Fear and Sickness' being the main culprit. On a more general level, after 20 years of making music, you'd think one of the Neurosis lot would have taken the time to learn to sing in a slightly more melodic fashion than they do, if only to expand the range of emotions they could put into their music. Conversely, where are the ridiculously bassy growls of Dave Edwardson? His vocal contribution to 'Locust Star' takes the song to another level and he seems to be underused generally. Like Big Si (Gareth's bandmate in Flatlands - editor) said, where is the return of Cookie Monster?

If you liked the free track made available by the band a month or so ago, 'Water Is Not Enough', you'll love the album. Likewise, if you're like me and have only been an intermittent fan, this is their best release so far. The album seems to be a summary of the best bits of the band over the years while losing a lot of the excess. Trimmed down, but no way light, this is simply incredible and their most fully realised work to date. This to me is what I imagined when people described them to me all those years ago and you can only imagine how pleased I am they've not only matched my expectations but surpassed them. Buy it.

Forums - - Neurosis - Given To The Rising