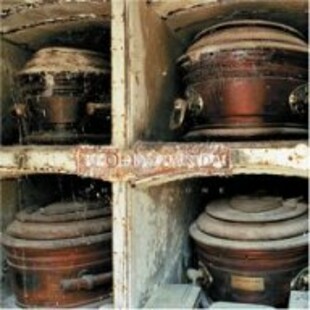 Bloody Panda have entered the consciousness of most music fans due to their split 12" record with rock orchestral experimentalists Kayo Dot.

Many expected that BP would be overshadowed by the brilliance of the new KD track. This assumption proved to be wrong, with tracks 'Circle & Tail' and 'Fever' holding their own against the seven piece's magnificent 'Don't Touch Dead Animals'. Both bands have now gone onto bigger and better things since their audio meeting: Kayo Dot signing to Hydra Head for their impending third album, and Bloody Panda being added to the ever expanding Level Plane roster.

From the absolutely amazing opener 'Untitled' to the pounding heaviness of 'Ice', BP's debut has "cult classic" written all over it. The heavy distorted guitars, Yoshiko's wailing gorgeous-yet-scary voice, the organ and battering drum and bass unit make for one unique sound. Like Mare collaborating with Boris on severe downers.

Bloody Panda have created a soul destroying, mournful piece of doom. 'Pheromone' is an outstanding record. You should definitely add it to your record collection. The album will also undoubtedly influence many, many musicians I'm sure. It could have easily been the highlight of 2007 too. However, it might loose this distinction due to one factor. Length.

I have always been of the opinion that doom is a mare of a genre when it comes to length. I can often be found moaning that some releases are far too long, and that culling a track would have made the record more cohesive, more listenable and simply far more enjoyable. I have to throw my hands up in the air with 'Pheromone' however. This record is too short.

Four tracks in forty minutes is impressive, but for one reason or another their debut album feels more like a long playing debut EP. Why 'Fever' (originally featured on the 12" split) is cut by two minutes seems inexplicable. The lack of 'Circle & Tail' is understandable (Alex and Ellen at Holy Roar probably wouldn't be too happy if both tracks from their release were appearing on a new album) but it's a crying shame nonetheless. They could have done with it on really. 'Mizu', an unused track from their original demo, could and should have been re-recorded too.

An awesome release, tainted. However, you're left wanting much more. So maybe it's worked in their favour... Roll on their next offering.