Throw Stephanie In The Incinerator The Road Is Long, Dead Horses Are Heavy 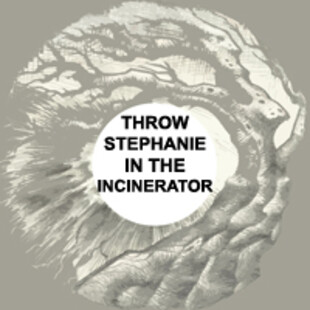 Two man bands seem to be all the rage at the moment. I think if I tried I could probably name about five or six doing the rounds, something that I couldn't have done 12 months ago - and no that's not because I only just learned to count that high. I suppose it's easier with less people to transport and/or argue with, but I sometimes wonder - is two enough, can you get enough good ideas out of two heads to make a decent band? In this case, two is just probably the correct number, as is the four tracks found on this CD EP thingy (I'm not quite sure what its going to be when it's released as all I have the CDR and I lost the press release in the pub, oops).

Anyway, down to specifics. Throw Stephanie In the Incinerator is two chaps from down Derby way, one on drums, one on guitar, making sounds in the style of Isis, 5ive's Continuum Research Project, Capricorns and the like. There does seem to be a lot of people doing this style of music at the moment and while it would be good to see some one do something different, its also good to see some one doing it well. Track one ('The Road is Long Pt. I') is the heaviest of the set and as such probably my favourite. It's got more bite, more riff than the other three, and in all honesty, the second track kinda just washed straight over me, but the layers and the stop-start, will-it-won't-it intro to 'Dead Horses are Heavy Pt. I' is really really nice, but then unfortunately I miss track four. It's not that these aren't good tracks, its just that one and three seem to stand way above tracks two and four.

In general this is a good little début EP, it is just that the more mellow side of this sort of music tends to let my mind wander and that's what I found by self doing here, listening to track one, then doing something else and realising that I'd missed the other tracks and having to go back.

Forums - - Throw Stephanie In The Incinerator - The Road Is Long, Dead Horses Are Heavy