Castor Troy This City Will Destroy Us 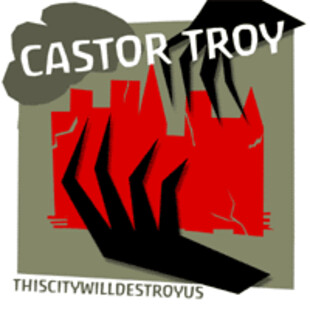 "We don't all wear bowler hats, or hire servants, more like 24-hour surveillance and dogshit on the pavements" - 'My London' by Lady Sovereign.

We are in a state of honesty in this country, 'rock and roll' is a propagated myth and people are actually telling the truth; now Lady Sovereign may well be the quintessential brat that garners hate from the general public, but at least she is speaking her mind...

Now why start a review by Coventry grind/fast/hardcore mixed bags Castor Troy, with a quote from what is essentially the opposite end of the musical scale? The reason is Castor Troy are peddling the same message entirely, living in the city or indeed the country is no bed of roses, and the claustrophobic architecture and blitz-smeared history of their hometown has obviously rubbed off on them.

With a good few years under their collective belts as a live band, this all-too-brief ten minutes shows what they can do, packing in frankly more riffs than the average band do in an hour, from the opening firework display of 'Love... I'm So Tired' with its accusing pointing-finger raison-d'etre "I've got nothing to show you" hinting at what is to come, which is ten minutes that will scare most.

'We Are As Birds' comes into play before you know what you are doing, and the soaring, almost epic second half is uplifting, bringing to mind a rushed Isis or Converge at a slow point. Before you can really start to feel anything else, they segue into blastbeat-ridden 'The One About The Dead Girl', packing in lines like "we've become everything we hate" showing the general self-loathing that this band exhibit a scary amount (their myspace title reads "Probably the worst live band you'll ever see...").

Next follows the longest track on offer, 'Fourth. First. Sixth.' which is slower paced than the rest but lets go none of the brooding, gravelly loathing that this band are really fucking good at. A swift kick to the balls starts the title track next, with tech-sounding finer tapping on offer, showing the immense production you can really hear everything through, especially the stabbing chorus (if such things exist here).

Personal and live favourite 'Wake Up... Its Starting' follows with its stop/start staccato awesomeness and is gone before you know it. Closer and lyrical summing up of this chaotic and frenzied release - "When people want to say/ Something truthful/ They tend to lie to avoid people thinking/ Different of them just because they are being honest" - now if that is not a statement of intent, I don't know what is.

Or maybe they are taking the piss and I've fallen for it like a prick.

Forums - - Castor Troy - This City Will Destroy Us