Heavy Lord From Cosmos To Chaos 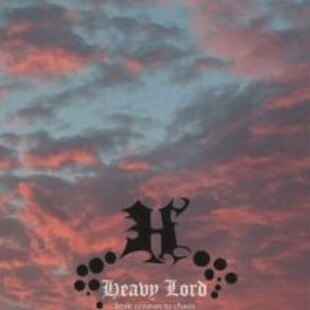 This is the second CD from Dutch four piece Heavy Lord, the other being a demo titled 'The Holy Grail' from 2004. From what I can gather, this is their first real official release and came out on Solitude Productions back in the latter months of 2006. I've been listening to it for a while now and it has really paid dividends to have been able to assimilate it properly. for sure and I guess you'd expect as much from a five track CD that lasts a little over 40 minutes. There are a couple of shorter tracks (around 5 minutes) but, it is the longer ones that really impress on repeat listens.

Opening track 'Elephant' begins pretty riff heavy and moderately sludgy. Here as elsewhere on the album there is a good mix of low bellowed vocals and some more throaty screams. It's good stuff and enjoyable for sure. Many bands would probably be happy, having established a groove and a good riff like this, to just repeat it and work the song to a rupturing climax. Heavy Lord eschew the expected path choosing instead to work-in subtle tempo changes and variation to gradually guide the track to a stop after 11 minutes.

Of the other two longer tracks on the CD, the last track 'While Empires Burn' is the most striking. It's a slow build up, lots of atmosphere and a surprising amount of melody though it is by no means light hearted. It only gets past mid pace after seven or so minutes but is strangely compelling in it's intensity and intent. It reminds me in places of Ultraspank (look them up if you can be bothered) and is an impressive ending to a thoroughly impressive album.

I initially approached this release with a little scepticism as I'm not usually a fan of songs that go on too long. That is not to say I dislike long songs. Rather that I believe it takes a certain level of song craft to compose ten minutes plus tunes that hold interest and are not simply the same riff repeated 20 times. Especially if you chose to stick with one particular style of music, in this case heavy doom. Yob were a prime example of perfectly crafted, heavy doom epics. Heavy Lord have considerably more groove than the increasingly dense balls of molten lead that Yob produced, but I find that the two share an ability to craft longer tunes of real interest that is currently pretty rare. If you have the patience this is heartily recommended.