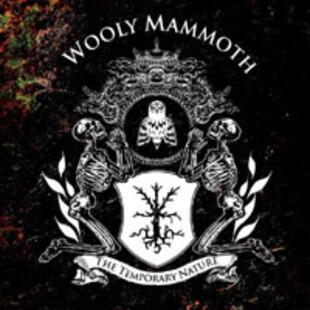 Okay, so just as a bit of back ground for you, the reading public; this is actually the second time I've reviewed this CD now. The reason I'm doing it again is because my original review (available for perusal in the forum for those interested in the progression of ideas) was somewhat unfairly dismissive of this rather mighty little collection of songs. For those of you unwilling to read two reviews of the same CD, the long and short of the original write up went something along the lines of: "blah blah blah Kyuss blah blah blah stoner rock cliches blah blah blah s'alright, like blah blah blah better than a lot of this stuff blah blah blah". Having continued to listen to the CD since writing that rather uncharitable effort, however, it has become clear to me that these boys are deserving of a lot more respect than I originally gave them so here goes...

Let's get the obvious criticism out of the way first, shall we? Wooly Mammoth are obviously three VERY big Josh Homme fans. Pretty much everything here has appeared already on either a Kyuss or a Queens Of The Stone Age record somewhere along the line.

Now let's actually bother to listen to what's on offer here and give credit where credit is due shall we? What we have here is an unashamedly stoner rock album: fuzzed out bottom end, grooves deeper than a maternity wards waiting room floor and an obvious love of 'good times' (ie Wild Turkey and executive length cigarettes) permeate every second but when it's all done this well you can frankly stick your cynicism (or rather, MY cynicism) where the sun don't shine as this album is an absolute fucking BELTER!

Opener 'Head Full Of Collision' sets the tone here brilliantly, managing to be reminiscent of (personal Kyuss favourite) 'Gardenia' whilst showing it's own character and a more uptempo approach. The album then proceeds to take the listener on a tour of Wooly Mammoth's understanding of what rock music is all about through doomier fare (track two 'From Meridian Hill' and the atmospheric monster of a title track 'The Temporary Nature') whilst injecting some more uptempo riff fests (indeed I defy anyone to not feel the urge to scream 'RIIIIIFFFFF!!!' in response to the start of QoTSA/Nebula tinged third track 'Black Spider, Red Spider') into the mix before rounding the whole affair off nicely with closer 'Mammoth Bones' which is an out and out tribute to Kyuss' parting behemoth 'Spaceship Landing' with it's bruising, lolloping belief that a good groove shouldn't be rushed and needs to be given at least ten minutes to breathe properly and breathe it does as the song is positively HUGE!

Basically, this album is proof positive that there's no such thing as too much of a good thing. Every song here pushes all the right buttons and will be welcomed into your life like an old friend you haven't seen for years within a few (honest) listens. Anyone who still listens to the bands mentioned so far will immediately love this record but I can't stress enough that for those who, like me, got tired of all the substandard Clutch/Kyuss etc impersonators who popped out of the woodwork shortly after QoTSA's initial success with 'Rated R' that with a little persistence and an open mind, Wooly Mammoth could well just remind you why you loved this kind of material in the first place. Excellent production, mature song writing... personally, I don't think anyone could ask for much more.