The Deen The Deen 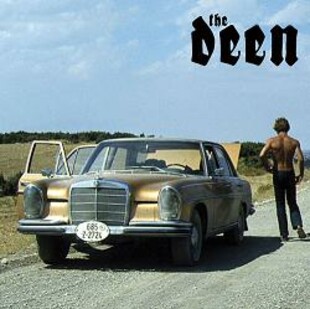 The artwork of this album gives you something of a headstart on what lies within. A photo from the 60s or 70s, featuring a classic car and a guy wearing what looks like slightly flared jeans adorns the front, while the back portrays merely a cracked-desert landscape. Sound familiar?

It is a little misleading to be honest. The Deen, who hail from Germany, are not your identikit-Kyuss copysists that some would (wrongly) make you believe inevitably follows the 'stoner rock' tag. In fact, while the term does apply, the sound The Deen produce is as much (early) grunge as it stoner. Their influences apparently include The Doors and Radiohead, but the main pointer here is Queens of the Stone Age, with bits of Mudhoney and Winnebago Deal thrown in.

Opener 'Bleed and Feel My Thorn' sets an accurate tone for this album - it contains some nice guitar, strong vocals, but never quite hits the mark. 'I Like You' contains a good chorus and that QOTSA feel, but this is offset by the weaker 'Man Eater' that follows. The album hits its high point in the centre, with the excellent 'For My Wasted Years' which is reminiscent of early Foo Fighters, with a huge chorus and Grohl-esque vocals, but with a heavier, stoner edge.

The rest of the album unfortunately never hits that height again, but doesn't at any point sound terrible. It's hard to describe in a way - it is generic throughout but never bad - in fact I've enjoyed listening to this the several times it took to write this review. I'll even reach for it again no doubt once this has been published. Harsher reviewers will slate this album no doubt, citing the moments where it becomes a little too clean cut and worries that they're heading too close to Nickelback territory (without ever doing so) are too hard to supress as reasons to ignore this. But I think it just about deserves a review that ends on a high - they definitely have the knack of writing good songs, and could certainly develop into something greater. Ones to watch then, perhaps.