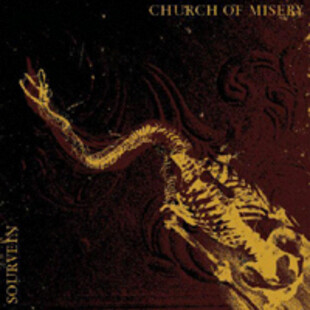 Here we have a lovely slice of white vinyl from Calculon Records. Within the confines on these 7 inches we have two bands producing some of the heaviest and best doom around at the moment. Two bands who have incidentally just completed a raucous and glorious batch of live dates together in the U.K.

Starting with Sourvein's cut, the appropriately dourly titled 'Doldrums' this release immediatly offers up all it's promise of grim doom and slow plodding beats. Having only recently heard Sourvein I would say that this is as good as anything else they have produced and a good representation of thier overall sound. Wonderfully heavy guitars and harsh vocals underpinned with the slow moving magma of bass and drums.

Church of Misery on record are often a two headed beast. They swap seemingly effortlessly between the psychotic serial-killer obsessed harsh doom numbers and the more upbeat serial-killer obsessed groove fests. This release offers us a glance at the severed head of the more groovy beast and is perhaps one of the most upbeat, straight forward rocking Church of Misery tunes I've heard. It is called 'For Mad Man Only' and is a nice meeting of constant driving bass groove and repetitive high register guitar with a pretty impressive solo thrown in the mix and a fuzzy reverb drenched ending. I couldn't claim it to be the best Church of Misery tune I've heard but, it's still very good indeed.

This is without doubt a release worth picking up for those in the know and the uninitiated alike. If you like either or both band already then you will most likely eat this up. But, if you've not heard them before and you have any taste at all both of these tracks should whet your appetite for more.