Isis In The Absence Of Truth 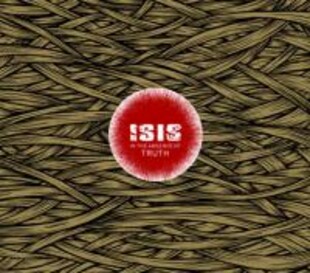 So, it's finally here. After refusing to download or listen to it in any way until the proper release date, (alright, the day after) it's finally here. Tearing off the cellophane (2 layers...), the packaging is a little disappointing after the glossy aerial shots of Panopticon and the sepia tinged seascapes of Oceanic. To put it mildly, the outside looks like a featureless wicker basket. Thankfully it improves slightly in the inlay with an 'action shot' (involving more wicker I'm afraid) and a quote attributed to the Hassan-i-Sabbah, the man on the mountain, a semi-mythical middle eastern figure who supposedly gave his followers large doses of hashish, lulling them into a state of rapture where they thought they were in the garden of paradise described in the Quran and giving them incentive to fight for their cause with increased fervour. Check me out, I read something in a book and remembered most of it. He crops up in 'The Count of Monte Cristo' and both 'Baudolino' and 'Foucaults Pendulum' by Umberto Eco if anyone cares. There is apparently a concept running through the album as with previous releases, but until the lyrics get posted online, we'll have to speculate as the vocals are still screamed and growled to a fair degree. Frontman Aaron Turner also mentions Don Quixote as a clue, although I couldn't hear anything about mad Spaniards attacking windmills.

As for the music, first impressions are that it is even more mellow than 'Panopticon'. Fans of 'The Red Sea' who feel the band have gone soft over recent releases won't be won back, but that's why it's called progression I guess... There is also a noticable flavour of Tool in the new material as well, especially during the extended middle 8 of the excellent 'Dulcinea' with it's simple but effective riffs and eastern flavoured solo, and the start of following track 'Over Root and Thorn', with it's sustained and bent notes bearing more than a slight resemblance to the guitar line from 'Lost Keys (Blame Hofmann)' from '10,000 Days' and a blatantly 'borrowed' tabla-esque sound at the 4:35 mark and again later. There is more of the quieter aspects of Isis in here too, Aaron's sung vocals being used more and Jeff Caxides' 'sparkly' bass sound (you know the one I mean) all over the place and more space for the music to open up. There is also much more delicate guitar work here too. The vast majority of '1,000 Shards' is made up from individually plucked notes from all 3 guitarists (Brant Clifford Meyer now having officially joined full time as a guitarist instead of just a laptop/electronics whiz). As a counterpoint to this, Aaron Harris has backed up his already impressive drumming with a double-kick which is thankfully not overused, a trap so many new bands fall into, but using it to add extra weight where it benefits the song the most, like the closing few bars of the aforementioned '1,000 Shards' where the quiet build breaks spectacularly.

Bad points? Well, despite the welcome inclusion of Aaron's cleaner singing style, the melodies used are all a little too similar to each other, or in the case of 'Holy Tears' to 'In Fiction' from 'Panopticon'. There are also a few moments where you feel the band are revisiting old ground, specifically from their previous two releases. Maybe it's slightly unfair to expect such a sonic leap away from their recent material, especially as 'Oceanic' is a personal favourite of mine, but after hearing Mastodons 'Blood Mountain' where whole riffs have been lifted from their own back catalogue I was hoping Isis wouldn't fall foul of the same trappings. Still, the band have embraced technology better than Mastodon with no hideous vocoder effects, deliberately 'crazy' synth noises or pointless hidden tracks (the bane of the low capacity MP3 player). Their love of electronics is most evident on 'Firdous E Bareen', all synthesised beats and a laid back Massive Attack style bassline at around the halfway point before the guitars come in proper instead of being used for ambient noise. By the time 'Garden of Light' (another man in the mountain reference?) has built up to its dizzying crescendo of guitar, drums and piano in a way rarely seen outside an early Mogwai album and crashed like the big post-rock wave they've always threatened to make, it's then you realise how good they are when they really nail it.

So, it's here and it's great. You've probably already bought it by now or downloaded it if you have no self control, (a trait which may one day get you arrested) and have formed your own opinion. For me, it was love at first listen and I feel it's depths are only going to open up the more I listen to it. It's albums like this that make me glad I over-analyse music. Every once in a while an album comes out even I can get a child-like excitement about, and this is it. A step forward in terms of proficiency of quieter moments, while being an almost perfect mix of soft/hard you'd expect. Brutal and beatiful and thankfully lacking the more pondering tracks that made the last half of 'Panopticon' a chore for some. Album of the year? Nope, that honour goes to a little disc called 'Vermuyden', but top 3 for sure.

Forums - - Isis - In The Absence Of Truth