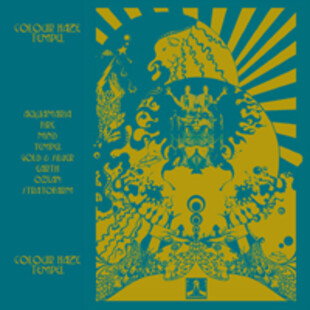 Colour Haze are a band that really do have their own individual sound and what an amazing sound it is, thick bass tone, buttery guitars, tasty cymbal work and vocals that are sung almost more as another instrument. So how is the new album Tempel, well for those of you who were already fans of the band this will not disappoint, there are less of the long drawn out songs of their previous effort such as Peace Brothers and Sisters but there is still more than enough to expand ones brain with. A new element that has been added is Stefan's use of falsetto vocals, this works very nicely particularly in the song "Fire" where he sings along perfectly with his guitar lines.

The best way to describe the album would have to be heavy psych, it harks back to the days of power trios and serious drug intake but still sounds fresh, I think this is mostly down to having a trio of musicians who are all very good at their chosen instrument. Stefan Koglek has a guitar style that mixes in elements of rock, jazz and blues in a way that just feels like treacle to the ears, Manfred Merwald's bass playing keeps the groove flowing throughout and has that strange clicking noise of his fingers on the strings that I've only noticed on Colour Haze records that adds a lot of uniqueness and finally the drumming of Philipp Rasthoffer that is full of jazz styling ala Mitch Mitchell and plays off the other instruments so well. To top it off this album even features some Hammond organ on the songs "Mind" and "Gold and Silver", a first for a Colour Haze album and a nice addition I think.

The album presents a good mix of the Colour Haze sound, there are some instrumentals, some heavy riff based songs (Earth) and those slow burning songs that they are so good at, building up from a super mellow groove into a wall of fuzz and soaring guitar leads. Some soul stylings are added to proceedings with songs like Gold and Silver and Mind and then onto the final song "Stratofarm"; this song just sounds awesome, theres a very nice rolling bass and guitar melody topped off with harmony vocals singing a whole different melody, sounds quite different to anything I have heard before. The guitar playing in parts almost sounds a little bit African, very hard to explain but rest assured it's all good.

If you already like Colour Haze buy the album, you won't be disappointed, if you have yet to hear the band I would recommend it if you like bands like Jimi Hendrix Experience, Kyuss, Sgt Sunshine, Brant Bjork, Los Natas etc.