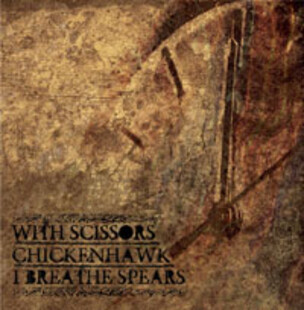 Chickenhawk are a fucking ace band. There's no denying it. I'm lucky enough to know they're an excellent live band. I know they're a really nice group of people. But I shouldn't - in fact, I'll state now, I won't - let these facts affect my review. So, with a clear mind and conscience, I can safely report that the two tracks on offer here are great. They are a bundle of energy - hardcore played as it should be - chaotic and riff-dominant like a Red Bull shot of adrenaline straight to the heart. They're original, yet can bring to mind the Melvins or Big Black (when the reviewer's instinct sets in - well this lame reviewer's, anyway). You get the feeling Steve Albini would love to get his hands on the production of their debut album.

This and their demo/EP, rightly lauded on these pages earlier, showcase a band truly on the up. With this, though, you get the bonus of two more bands to hear, quite probably, for the first time.

I Breathe Spears come next, and they are distinctly less impressive. It's screamy barky hardcore that's ten-a-penny on your standard toilet-venue bill, with twiddly guitars that do nothing for me. I dunno, maybe it's just me - this isn't the music of my taste for certain, and a better judge may give a fairer reflection - but as it is, their four tracks here offer little of interest (even though it does peak during their final track 'A Dagger Pointed at the Heart of Antartica').

With Scissors fare better, but only a little. There's a lot going on, and you can tell some of it is good, but only just - and that's the problem, it's crowded, a bit of a mess. They have moments which really grab the attention, but it soon becomes clouded in a hardcore frenzy. A shame really. As mentioned whenever their name appears anywhere, they feature members of Eighties Matchbox B-Line Disaster but this fact is barely recognisable from the music, as far as I can tell anyway.

So this split peters out unfortunately after the thrill of Chickenhawk. To be fair, as I mentioned earlier, it isn't my thing and may appeal to some from start to finish. For me, I'll still keep this at hand, but barely ever venture beyond the opening couple of tracks.