Teeth Of The Hydra Greenland 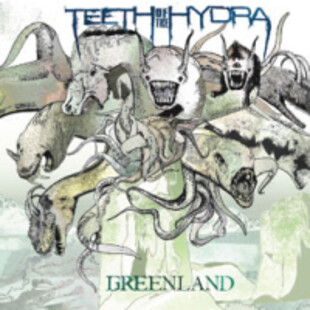 I continue to be amazed by what record labels will actually put out. I really do. In fact, I'm having trouble simply getting my head around the concept that someone felt strongly enough about Teeth of Hydra's music to bankroll an entire album.

Now you may feel I'm being unduly harsh here, but I for one, am completely sick of hearing bands with no real identity of their own. It's a sad but inevitable fact, that any given scene will eventually become diluted by an overabundance of copycat bands.

The irony of the matter is that Teeth of the Hydra would actually benefit from simply ripping off just one band. As it stands, 'Greenland' feels like a complete stylistic mess, never settling on one style long enough to create any kind of coherent identity. Teeth of the Hydra simply can't decide who they want to be. One minute they'll be doing their very best High on Fire impression and the next they'll be indulging in some ill advised Isis styled atmospherics. With every passing song I'd name checked at least another two bands they'd lifted ideas from. I can't shake the notion that this might have been quite an enjoyable record, had the plagiarism not been so overtly scattershot.

It's a real shame because Teeth of the Hydra are clearly capable musicians. All the songs are well executed and tightly played but the band just lack any semblance of originality. I'm sure the band have a good album in them, they just need to focus their sound and further develop it into something they can call their own.

Forums - - Teeth Of The Hydra - Greenland