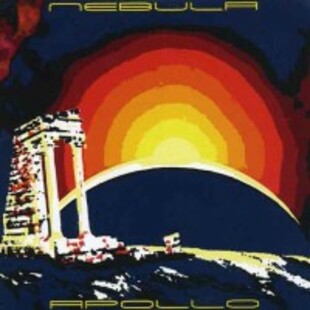 This is splendid stuff. 'Apollo' is everything you expect from these stoner legends - straight-up rock and roll with all the right psychedelic touches - with a new-found sense of texture. Opening with the delightfully Fu Manchu-esque (which is no surprise, really) 'Orbit' and the no-frills-blues rock-out of 'Loose Cannon', this album doesn't disappoint. I must admit I'm not overly fond of stoner-rock's more retro tendencies, - I was never too keen on Nebula's 2001 album 'Charged', and as a result missed it's follow-up 'Atomic Ritual' completely - but this is an altogether more progressive offering. with a lush-sounding production to gives the record a great sense of energy.

Eddie Glass and co's sense of the psychedelic rears it's impressive head on the gloriously jam-filled 'Future Days', replete with folky sitar/acoustic/sheep intro - this being my personal favourite brand of Nebula songwriting. But they can't help themselves and before long the rock is back with the powerhouse riffage of 'Ghost Ride'.

A couple of jam-track interludes pass by in the shape of 'Wired' and 'Trapezium Procession', before the album's space theme really makes itself known on 'The Eagle Has Landed' - one of the highlights of this disc. Some priceless space-launch samples play out over an undulating drum and guitar intro before the rocket-powered riffs propel the band on their own space odyssey.

The album ends as it began with the opening Zeppelin-esque jamming of 'Orbit' fading out, leaving the listener both dazed and confused, but glad that Nebula are back with another classic.