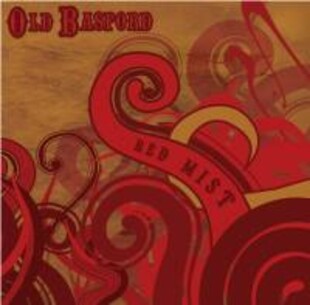 Ah yes, this is why I love the music I do. When you're generally dedicated to one (vagueish) genre of music, you wonder whether it can last, whether you'll stay monogamous or whether you'll be playing away from home before the year's out. And then, as ever, something slips on to your stereo and your faith is restored, your passion, while not yet necessarily in need of reigniting, is stoked.

I'm not new to Old Basford - I saw them years back and enjoyed their earlier demos. Good stuff too - favourable retro stoner rock type stuff in a Josiah vein. But recently their name appeared to slip off the radar somewhat, and with the return (albeit for a one off special gig) of Blackrock, the cult band with which members of Old Basford cut their stoner teeth, it was a slight surprise to find this EP emerging.

Sticking 'Red Mist' on it becomes instantly clear: this is magnificent, thrilling music. The band list Thin Lizzy and Tom Waits as influences and there is certainly a retro feel again - like it belongs to another era, one where they would be lauded as champions. Yet this is 2006, and those of us with the intelligence to appreciate the "stoner" sound will not be put off - the clean producton and sheer quality of song makes this as relevant and good as anything going anyway.

The title track opens the EP and sets the cool vibe off nicely and you know you're on to something special. The brilliantly named 'Do Gooder' follows, kicking off with a surprising punk intro. The vocals here mix (as with their previous demos, most successfully on 'Cruel Love') between the usual vocalist and a back up so high pitched it's almost Bee Gee-esque, and it works perfectly. They continue into 'Deadline' with the lighter vocals taking centre stage buliding with groove to a great chorus.

'People Don't Talk Right' is next, and while being the weakest track here, isn't bad at all. This just whets the appetite further for closer 'Food in the Fields'. To call this song superb would be an understatement. It's heartwarming, smile-enducing rock bliss. It makes me pull silly grinning faces, raise my arms aloft and see the light at the end of the drabbest of work days.

Yeah, this is an overly gushing review, but fuck it, this deserves it. I could dissect and try to be critical, but it gripped me from the off and if it makes me this enthusiastic then I'm sure I'm not the only one who'll feel this way. Get hold of 'Red Mist' (complete with artwork designed by Taint's Jimbob by the way) and see if it makes you smile like it does me. Album of the year without a doubt - if it weren't an EP that is.