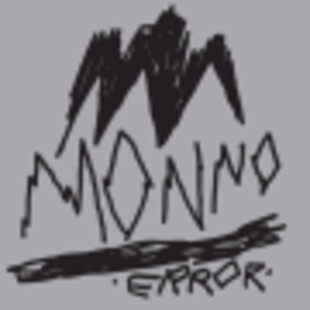 From start to finish 'Error' is a scathingly visceral listening experience and it's hard to believe Monno are a mere four piece consisting of a drummer, a bassist, a saxophonist and a laptop noise artist. Monno attack every song with a total disregard for musical norms, as they proceed to channel the spirit of free jazz through the rotting carcass of 80s industrial. They use every weapon at their disposal, from gritty swathes of laptop noise to piercing bursts of over amplified sax whilst cyclical bass grooves and heavy handed percussion throb away in the background.

Repetition provides the backbone for the majority of the material on 'Error', giving the songs an almost hypnotic undertone, with the bass often playing around a single two or three note motif that mutates slowly throughout the course of a song. There's a straight up punk like irreverence to the riffs and even subtle touches of melody that shine through from under the blanket of utter sonic abuse. Vocals are used sparingly and are generally distorted beyond recognition, further adding to the many layers of dissonant chaos. The overall result is music that's as abrasive as it is rhythmic, sounding like some kind of sick amalgamation of Lightning Bolt, Wolf Eyes and Circle.

It's interesting to note that the recordings on 'Error' were culled from a number of different sources. Instead of choosing to rely on straight up studio recordings to represent their sound, Monno have also included various live recordings. These are scattered throughout the album, presenting an even mix of high energy live performances and studio sessions. All the material is expertly mastered and mixed, making it almost impossible to differentiate between the two without referring to the booklet.

The pairing of both live and studio recordings is innovative in itself and it's something I've not heard done since Swans unleashed 'Soundtracks for the Blind'. The combination of the two makes for an incredibly charged listening experience, and if the sheer energy that radiates from 'Error' is anything to go by, Monno are a force to be reckoned with in a live setting.

'Error' is an innovative, distinctly nasty piece of work that deserves to be heard.