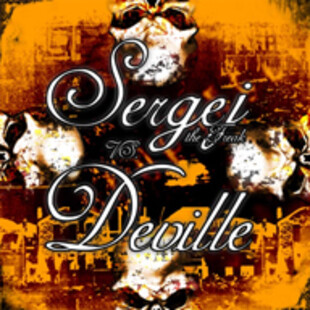 Sergej the Freak vs. Deville - no, not the tribulations of in-fighting between members of some 80's glam sleaze rock group, but the pitting of two Swedish bands together by the great Daredevil Records imprint. When it comes to splits you usually find the track input restricted to one each on seven inches, two on an EP or 12 inch or maybe four to make a complete album. Unless you're talking grind bands with five second long songs, that's usually your lot. Here, however, we get eight full length tracks each - a full album per band no less - perhaps joined to help increase the exposure of both bands who until now haven't pricked the mass public consciousness (within their chosen genre).

Both Sergej the Freak and Deville share a similar sound - both undeniably, proudly and loudly stoner rock; both heavily influenced by the output of Josh Homme. For many, the lack of originality in the sound, if not the song writing, will instantly be a major off-put. For others, this will have to be compensated for with some top-notch songs for it to be ignored - and for the most part, to varying levels, the Scandinavian pair achieve this successfully.

Sergej the Freak begin, and have one eye on the Kyuss back catalogue throughout their recording. This is most evident on 'Shocker' whose opening could've come straight from 'Wretch', but is noticeable throughout their half of the CD in sound and style. They certainly have the songs though - the Fu Manchu-y 'The Dark Lodge' starts things off well, the following 'Nothing Good' is even better and the quality is high throughout. Their individualism is made further creditable with the presence of a few other influences - whether on closer 'Time is Mine' with the almost-pompous-but-just-gets-away-with-it joining of acoustic guitars and string section, which is reminiscent of Blind Melon - or even more surprisingly when 'Seth Kill Joy' breaks down into a suspiciously Sublime-like breezy jaunt, and yet still seems to work.

Deville's contribution is more taken with the Queens of the Stone Age angle, although it is infused with several other strains of stoner rock that make the sound harder to pin down to a single influence and therefore stand out more on its own. Deville also have some cracking songs - 'From Below' and 'Lowride' are about as fantastic and enjoyable tracks as you can wish for from the genre, with the latter in particular, with its dominant big riff and happy, flowing rhythm sounding like early Queens, or perhaps some of the less 'quirky' moments of the Desert Sessions. These stunning moments are nearly matched in the other six offerings, making it a truly gratifying listen.

So there you go - two bands with some great music. With songs that simultaneously rock extremely hard and put a huge smile on your face, then if the lack of anything new in terms of style isn't likely to be a hindrance to your listening experience then I strongly recommend this release.