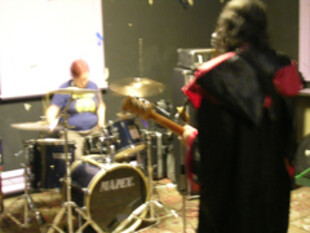 Having toured with this band, I think I can safely say I've never felt so oppressed by noise as when they unveiled about fifteen minutes of horrid drone in a Lancaster basement, in a space where they'd struggled to get a PA and fridge in, this kind of noise was perhaps the least conducive to people keeping down their beer and tea.

So to their demo, the second incarnation and hopefully a signal of things to come, 'Shit2' comes forth like a fetid great turd from the buttocks of a tramp who has been eating soil. Kept as a simple guitar/vocals/drums combo, Tim (or The Host Sepia as he affectionately refers to himself) and Linds (the Stonerwitch) create a racket that brings to mind instantly Burning Witch, Sunn0))) and Boris with a bit of old school doom thrown in for good measure. The guitar tone is set to stun and the addition of a bass sound via a split pedal only adds to this. The drumming is kept to a less crushing and more malevolent pace and this helps matters, instead of being attacked from the front by massive riff crunches, you are slowly dragged under by the intense bass drone that emanates from Tim's amp. The vocals here were (I'm told) recorded in a shower, now this may be unorthodox but it certainly adds to the grimm atmosphere that surrounds this release. From the artwork to the chanting in first track 'carny's crippled hound' this release is a nod to drone masters like O'Malley et al without ripping them off, an almost black metal aesthetic comes across at times, such is the production and delivery.

All in all it;s four tracks of absolute horridness that you should check out, and possibly catch live (if you can stomach the rumbling).