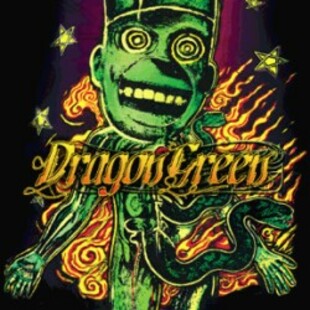 So, the veterans among you may be asking yourselves: if this is such a classic album why haven't I heard it? Beats me. I hadn't heard of them until last year and I've been listening to Stoner/Doom/Sludge for more years than I care to remember - ha ha.

Dragon Green are (or rather were, as they split in 2004) an instrumental outfit who's stock in trade is heavy, groove soaked, workouts. So, if you need vocals with your tunes, move along, there's nothing to see here.

Opening track "Turning Stones" kicks of with a mid paced bass heavy riff that shares a lot of common ground with the likes of early Goatsnake, early Electric Wizard and Warhorse. Yes, it really is that heavy, all ballsy bass rumble and low end menace. In fact the first thing that strikes you about the production job is just how close to the ragged edge it really is, threatening to collapse in on itself in a distorted heap at any time, but never actually doing so. Then suddenly comes the calm, after 5 or so minutes repetition of the pummeling opening riff comes a calm little interlude that again reminds me of the likes of Electric Wizard at their trippy best, then it's back to beating you into submission with variations on that initial riff again.

As you may have gathered, Dragon Green aren't the most technical band out there but what they lack in complexity, they more than make up for in sheer power and riffing. "Deleted" is a little more schizophrenic and tends to change gears from mid paced Stoner to crawling Doom and back again whenever it feels like it. "Marker 5" (that's track 3 fact fans) is a full tilt High On Fire esque number minus the energetic drumwork of Mr Pike and the gang, that drops into sludgey doom heaven with 2 minutes remaining of its 10 minute runtime. "Gipsi The Amateur" stomps along like an overweight stripper, all sleaze and groove, again mirroring the shifts of tempo first witnessed during "Deleted". The slow part is awesome in this tune, pure Electric Wizard menace but with an undeniably groovy heart. Closer "Rumble Strip" is probably the fastest paced song on the album and starts off with a galloping riff that sounds like it may careen off the rails at any time before collapsing in on itself and slowing to a meaty, rumbling Goatsnake inspired mid paced stomper, then back to the gallop.

In conclusion, this is a damn fine album for those of us who don't mind a band who aren't trying to reinvent the wheel or be too clever and arty for the sake of it. If you want something that's got the bass heavy low end of Warhorse and Electric Wizard, the pummeling riffing of High On Fire and the swagger and groove of Goatsnake, but without any pesky vocals getting in the way then look no further Dragon Green are here to cater for your needs.