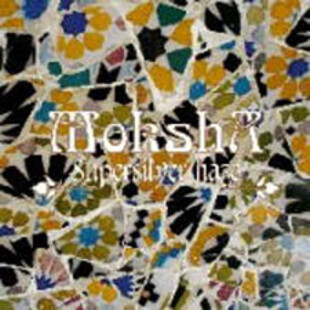 Now this is a bit of a surprise. I'd never heard of Moksha, from Spain, or indeed the label that this album has been released on, before it popped through my letterbox. To tell you the truth, I hadn't heard much metal from Spain at all to be honest, so it was with a lot of intrigue that I played 'Supersilver Haze' for the first time - especially so because of the stunningly beautiful cover artwork and packing that accompanied it.

In fact, while the artwork and the title suggest a trippy stoner vibe, what actually greets you in the shape of album opener 'Down the Sun' is a raw, brutal blast-wave of a riff and growled vocal combination, that rolls along on a great heavy groove. Moksha, it appears, have listened to and learnt a lot from several sub-genres of rock and metal and combined them to good effect to create a superb album.

The general feel is that of sludge rock - but approached not from beginnings of doom or hardcore as so many others do, but from a purely rock angle - if you're a fan of the Beaten Back to Pure, who possess a guitar swagger that underpins the aggressive vocals, then chances are you'll find much to enjoy from 'Supersilver Haze'. Across the album the influence of everyone from Crowbar to the Spiritual Beggars to Sleep to Entombed (particularly on the frankly brilliant 'Old Time Story') can be detected without ever sounding generic by sounding too much like one band.

'People Like to Fake' is another classy track worthy of individual mention, with a grand, slower guitar sound swathing over you from the start. It's not all to this standard with some tracks offering little (and the growled cover of Janis Joplin's 'Move Over' is only fun for the first few listens - after which it becomes gimmicky), but on the whole, 'Supersilver Haze' is a high quality release, and yet another album to emerge from an unheard of source in mainland Europe that oozes class. Excellent.