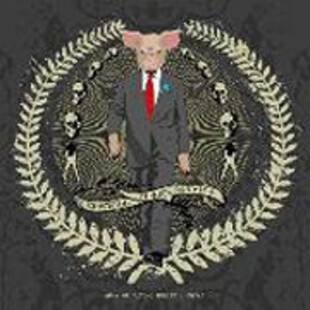 Well Kunal has done it again, the glorious Superfi Records unleash another two UK contenders on a slab of this time, grey vinyl.

First up we have the always interesting Army Of Flying Robots, coming in with two tracks faster than sweat off Lee Evans' forehead, their traditional hardcore take on Grind always makes me smile, and even more so now they've worked some more elements into their constant barrage sound.

A scream starts their first track 'In The Shadow Of Swine' and it does a great, inhuman blend of Combat Wound Veteran before reverting back to old hardcore with some great backing vocals as lyrics that take a somewhat Animal Farm theme gush forth in the two or so minutes the song lasts, lines like "And so the pigs took over the farm, soon they'll roast on spits" having these Orwellian traits in particular.

Second song 'Embodiment' starts off relatively slow for the Robots, soon speeds up and becomes a political tirade, taking the words of idiot US Secretary of State Al Haig and turning them round with pure vitriol ("You just give me the word and I'll turn that fucking little island into a parking lot") before it ends with some lovely piano, never thought I'd hear that on a Robots release. You should also read Henry's liner notes with care, as they are always informative. Brilliant stuff.

And so onto side two of this release, Welsh giants Taint take up the whole of the side with their song "I'm Going To Kill Henry Ford" which fucking rocks in a manner of speaking. Starting off with a killer blues riff and some fantastic production, these valley boys certainly know how to kick a mean riff, while maintaining a sense of urgency throughout the proceedings, the vocals are as sincere as they are barked "Today's heroes are tomorrow's parodies" sticks in your mind long after.

All in all, Taint create a battering ram of a sound that belies their limitations as a three-piece, sometimes it takes thinking about practical aspects of a band just to realise how amazing they truly are, the sounds that Jimbob, Chris and Alex create put bands with more members to shame, the bass sound is perfection in four string form, the guitar sounds as rugged as they do live, the drums crash and rip and Jimbob's vocals are a constant delight, his Welsh accent slightly coming through in his half-bellowed, half-spoken vocal style, they even fit in an Isis-like drift before a doom-like ending wraps up a truly crucial seven inch record; I only wish they'd do a series!