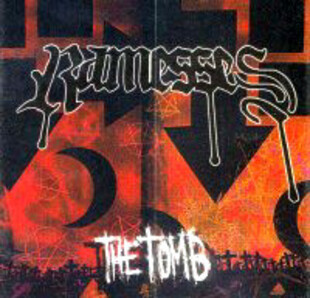 The Ramesses boys return with another slab of punishing Psych/Doom/Sludge. Produced this time round by scene legend Billy Anderson after the splendid remastering job he did for them earlier in the year on the 'We Will Lead To Glorious Times' disc; which was a collection of the initial Ramesses demo material polished up and given a new lick of paint by Mr Anderson. Very good it was too.

Ramesses start proceedings this time round with a subtle Eastern sounding riff that quickly builds into the churning, slow burning Doomfest that is The Tomb. Now, while I'm a fan of many of Billy Anderson's production jobs of the past I think he's been losing it a little lately and burying things under too much sludge, thankfully that's not the case here. Not the most bass heavy crushing thing you'll hear all year but it works in the context of the material. Adam Richardson's vocals on 'The Tomb' vary from a low rumbling growl to a more "scratchy" sounding traditional sludge type of vocal while all the while the riff churns and writhes behind him. One of the things I love about Ramesses is the loose approach they take to the music which gives it a jammed out feeling of freshness and I'm thankful to say that persists here. The drums are especially nice with plenty or fills scattered liberally through the piece which manages to avoid sounding like some of the more run of the mill doom acts on the circuit today who take a more minimalist approach to the drumming side of things.

On to track two now, 'Cult Of Cyclops', it immediatly kicks in with the low growled vocal and another creeping, crawling riff that just oozes out of the speakers, great stuff. Then two minutes in there's a bit of a curveball thrown in, the vocals creep back in as an almost chanted piece quite low in the mix and slowly building, then it's back to the harsh sludge style vocals, then back to the growl in the space of a minute and a half or so. This adds a neat new dimension to proceedings and a bit more variety and texture to the vocal line which is most welcome. Five minutes in now and everything drops out leaving a solitary bass rumbling away and slowing things down to a real doomy plod, this slowly builds again with the "chanted" vocals making a reappearance interspersed with more of those low end growls. 'Omniversal Horror' is next up, and starts out with a very chug heavy metal riff with either a processed vocal line or a sample in the background, maybe a mix of both. It carries on in this vein for about half of the song's six minute runtime then suddenly it's stripped down to just a guitar and some basic drums before launching into the second half of the song proper which has Mr Richardson belting out some great lyrics in a similar style to 'Master Your Demons' from the split with Negative Reaction and the 'We Will Lead You To Glorious Times' disc. A fitting close to the Billy Anderson helmed tracks.

But there's another track listed I hear you cry. Indeed there is but this is officially a "bonus track" for the cd and consequently has a different mixing credit to the tracks that have passed (Paul Horlick and Stuart Matthews for those interested). 'Unholy Outburst #3' sounds like a straight up instrumental jam track. Starting with a much more traditional stoner sounding riff than the other material it's a ten minute flight of fancy that works suprisingly well. Propelled along by a good solid bass and percussion line it allows Tim to cut loose with some serious guitar noodling. Four minutes in however and things change, the guitar is cut back to an effects laden almost ambient noise track which steadily succumbs to a wall of wailing feedback. Those ever pounding drums start to build and you start thinking "Where is this gonna go next?". Well, the answer is it sort of collapses in on itself (but in a good way) and becomes a bit of an experimental piece with seemingly random drumming and bursts of noise and feedback. An interesting departure, yet it still feels right in the context of the whole.

These guys deserve to be huge (relativly speaking of course, I'm under no illusion that they'll be playing stadiums anytime soon - ha ha) in a scene that can be sometimes content to trade on past glories. It's a fresh slant on the Doom/Sludge/Psych but with enough familier elements to appeal to established fans of the genre.