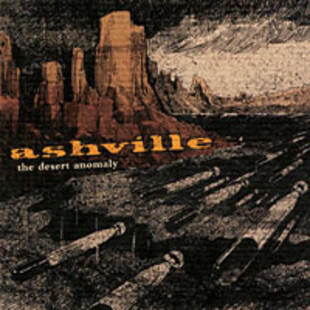 This probably isn't the real reason for the name, but the anomaly referred to in the title lends itself appropriately to the fact that Ashville play with the conviction and style of the much lauded desert sound of West Coast US stoner rock bands, yet come from the decidedly desert-free land of Belgium. Not that any band should be musically bound by their geographical circumstances of course - and thank goodness, because while 'The Desert Anomaly' is undoubtedly indebted to bands from across the Atlantic, it is a very enjoyable EP indeed.

Ashville mix the style of the desert pioneers (opener 'Torpedo Run' has a definite Unida feel to it) with a close relation in the gruff-voiced, whiskey-drenched stoner rock 'n' roll more typical of the South, with bands like Alabama Thunderpussy springing to mind. To be honest, at times it's not exactly the most inspiring of sounds, as originality struggles to be found. But Ashville generally get around this problem, often by utilising a more metal style guitar than you would expect if it were truly aiming to imitate it's imitatees.

It comes off well too; the mixture of blues rock guitar and metal riffery complimenting vocalist Stephane Legat's gravel voiced approach nicely. It actually feels sometimes like one of the guitarists is simply not a stoner fan and doesn't know which effects pedal he should be using at any one point, but happy enough to go along with the flow of the rest of the band. (To be fair there are the moments where the band follow suit, and sound almost Biohazard in style.) All in all, despite missing a tad of originality and maybe being in need of a beefier production, it's something that is well worth checking out, and a decent platform for Ashville to try to launch themselves into the European stoner rock community's consciousness.