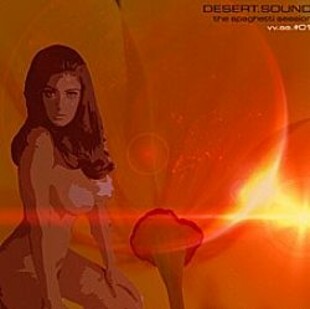 Like Kate Bush and Space Raider crisps, compilation albums will always have a special place in my heart, especially when produced by magazines or webzines. I have discovered many great bands through the tried and tested method of 'put it on, read a book, check out anyone who catches your ear.' Hell, I've even been on a couple of magazine CD's myself. However, there's always a problem with reviewing compilation albums. There's always inevitably a huge mix of material to sift through, and as a track-by-track account of compilations is a huge task, there's always gaps as reviewers attempt to praise the best tracks and warn people of the duff ones, that a lot of material gets untouched. Maybe that's why the folks at the Perkele WebZine have enough nous to warn fans not to pay more than 10 Euros, (about £6.80,) for this 16 track mix. Anyone into their stoner would do well to pay the paltry amount and use the above method to keep on top of the up and coming bands of the scene.

Thankfully, our beloved and benevolent leader here at ninehertz (Pete) has already covered a couple of the bands on here in the album reviews section, namely Alix and Black Hole of Hulejra. Rather than re-hash what he's said, you should go check out his reviews in the archive. It's not just me being lazy. Honest.

As far as style goes, there's enough fuzz to provide beards to most of China, and the cover art is suitably covered in 'artful' renderings of naked ladies. Bonus. You should now have a fair idea of what you're getting with this, but listening through the disc thankfully throws up a few pleasant surprises. 'Black Doll,' the contribution from T.H.U.M.B. is a slow and dirty number with plenty of heavily-effected guitars, with a huge filthy riff that shows there's still plenty of life in the psychedelic-rock genre yet. Less impressive is Third Stone From the Sun, who seem to be running though a stoner-by-numbers track with some slightly under-fed lyrics. Likewise, Vortice Cremisi fail to shine through some paper-thin production due to a couple of un-inspiring riffs and a track that doesn't really go anywhere.

Fortunately, it's mostly good stuff, like Gonzales and their hyperactive run through 'Dark Mood,' which won't win any awards for originality, but has great energy and enough interesting guitar work to keep the musos like me happy. Contrary to my earlier statement, I have to give a mention to Black Hole of Hulerja, whose track 'Tropic,' is one of the better offerings on the disc. Apart from some cheesy samples of thunderstorms, it's a lazy, chilled-out number, led by a ridiculously simple guitar line and is exactly the kind of music I think of when someone mentions stoner rock. At 7 minutes it over-reaches itself slightly, and could do with a little more variation, but overall it's my personal favourite track here. Hellvis keep the metal side of things well represented, redeeming a slightly dodgy track from some blatant Slayer-isms and megaphone vocals in the opening minutes by changing the pace and making their 'When Hell Freezes Over,' less obvious in it's closing half.

Like I said earlier, compilations are always a slightly risky purchase, and I personally wouldn't listen to about 40% of the tracks on here again. However, I have discovered a couple of excellent bands who I wouldn't have bothered with otherwise, whose tracks will be added to a Winamp playlist and whose albums/EPs will be sought out. And isn't that what it's all about? For that reason, along with the bargain price, Desert Sound 01 is a well worthwhile purchase. Italian stoner eh? Who'd have thought it.