Queens Of The Stone Age Lullabies To Paralyze 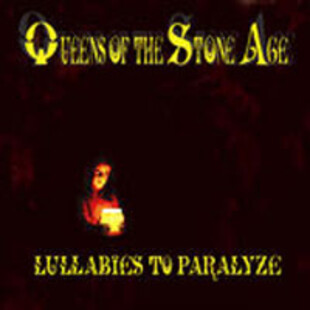 OK, so we're a bit behind the times here at ninehertz due to other commitments, like work, trying to organise gigs and nursing kittens with gammy paws back to health. This review is also late because it's the first Queens album I haven't bought on the day of release, (excluding the Queens/Kyuss split,) for one reason or another. If you're a fan, you'll probably already have this and have formed your own opinions, but for anyone like me who was a little underwhelmed with 'Little Sister,' and is still undecided, read on. First impressions are good, the foil stamped packaging is immaculate and, (nice touch), the accompanying booklet has a little space under the heading "This CD belongs to," where I presume you're supposed to wrie your name. I was going to write 'Tim Armstong,' for a giggle, but thought better of it.

Opening track 'This Lullaby,' could be a track lifted from any one of Mark Lanegan's solo albums, with a lone acoustic guitar providing the instrumentation to a backdrop of slide guitar wails and Lanegan himself with that voice. Anyone fearing a massive change of style can calm themselves. The album quickly shifts back to familiar Queens material with the short but sweet 'Medication,' and 'Everybody Knows That You're Insane,' which begins with an intro reminiscent of the more experimental tracks from the 'Rated R,' before kicking in with a big dumb chorus. 'Little Sister,' fares much better as an album track than in isolation as a single, as even the most die-hard fans can't really argue with the observation that it is a very lazy track stylistically. In fact, it's the more experimental tracks that stand out on the CD, such as the excellent 'Someone's In the Wolf,' and the bizarre robot-stomp of 'Tangled Up in Plaid,' coming off better than the more typical tracks like 'Little Sister.'

The biggest gripe I can level at 'Lullabies...' is that there's a noticable absence of short, screamy numbers and the other stylistic deviations that the frequently naked Nick Oliveri brought to the other albums. Not to knock the man, but an hour of Homme-penned material is a bit much for me, and I start wishing for the next 'Autopilot,' or 'Six Shooter,' to pop up and save me from drifting off during the last half. Bonus track 'Precious and Grace,' is also a little obvious. As good as it is, it's a blatant signpost to the bands references and is totally unsubtle, as is roping in ZZ Top guitarist Billy Gibbons to play lead guitar on the frankly dull 'Burn the Witch.'

Right, lets get this out of the way: this is the weakest album that Queens of the Stone Age have produced so far. I was immensely disappointed the first few listens and this didn't really pick up until I put it on a few days ago to prepare for this review. I'd had the album on for a couple of days as background music while reading tree-based door stop 'The Count of Monte Cristo,' and coming back to it, found the songs more familiar that I'd credited. I even found myself tapping out the rhythm to 'Someone's In the Wolf,' at work without realising it. Maybe it's an extreme case of an album being a 'grower,' than I've come across before with the exception of Tools 'Ænima', which I inexplicably hated for days. Sadly, only time will tell, and Josh and the boys will probably have another five albums between them out by then. Until then, the floating voters should definately give it a shot.

Forums - - Queens Of The Stone Age - Lullabies To Paralyze