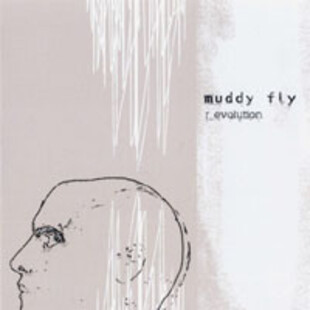 Muddy Fly are a 4-piece band from Italy, not the first place you'd associate with stoner music, but then not everyone has to be from the California desert do they? They produce a fairly unique blend of grunge and metal which is an overlooked pairing these days. But before you go crying into you old Alice in Chains records muttering something offensive about Puddle of Mudd and the rest of the nu-grunge revivalists, you should give 'r_evolution' a spin. While it doesn't score 10 out of 10 across the board as the boys are claiming in a recent post here on 9Hz, it's a far cry from the utter shite that's been masquerading under the grunge banner these past few years.

It starts off very promisingly with 'Liquid Shadow,' a great track that could have been huge in the early 90's with a swaggering chorus that's catchy without being too obvious. Third track 'Your Justice,' kicks off with a fuzzy riff and awesome groove that would do Queens of the Stone Age proud, but it's a bit of a let down to follow it with 'Crawl Away,' a slightly dull track that doesn't really go anywhere interesting during its 4 minutes. Things pick up again at the halfway mark, but by now that uneasy feeling that you'd been pushing towards the back of your mind is all too clear. 'r_evolution,' is a great grunge/rock album, which is its biggest asset and its biggest failing. Unfortunatley, the genre died a few years back, with many a fan crying into their flannel shirts before cutting their hair, getting proper jobs and listening to Isis, (myself included,) and you can't help feel the album is a little too late to start any sort of revival.

Which really is a crying shame. The musicianship on the album is immaculate throughout, and the guys are clearly very into what they do. The production isn't amazing and often a little too bass heavy but the tunes are all present and correct and there's enough ideas here to suit most tastes of the rock genre. The most common reference point would be early Stone Temple Pilots, with the heavy guitars and Daniele Braglias' Scott Weiland-esque crooning, especially on acoustic number 'Deep Inside.' However, my original point still stands; while it's an excellent example of the genre, it's arrived on this reviewers stereo about 8 years too late. If you're just discovering the world of grunge, then this is a good, solid record that you'll enjoy when you've played 'Dirt,' 'Superunknown,' 'My Brother the Cow,' and 'Dust' to death. For everyone else, it's a glimpse to the past which was too long ago to retain strong feelings over and too fresh to be nostalgic.