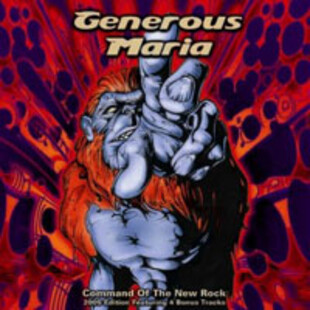 Assuming you're still reading despite this record's less than inspiring title, this is the old school Swedes first full length album and is about as big and dumb as they come. Not ones for quiet introspectives and lengthy discussions on Proust, virtually every song is full of massive fuzzy guitars, lyrics about space and generally sounds like it was dug up from the mid-70's. Generous Maria are all about the rock, to the point where one of the guitars in 'All Units Are Out', is playing a solo about 50% of the time, even after nu-metal and post rock were supposed to have killed the things off. Not to mention the pictures section on their website, which shows the boys collectively sporting enough hair to make wigs to cover the bald patches on the newly reformed Judas Priest, with the exception of the fantasically bald guitarist Dan Johansson. (Sadly no relation to Scarlett Johansson.)

Despite the overwhelming smell of Swiss cheese, I couldn't help enjoying this album. If I'm honest, I'm fairly pretentious when it comes to music and this kind of thing would usually have me spitting in disgust. In fact, it's been in my CD player for a while now, and will continue to get played long after this review gets written. Generous Maria are a band of highly competent musicians, and the stupid rocker image they seem to radiate belies the subtleties in the music. There's not a note out of place and the whole thing sounds like it was crafted with the utmost care which is always reassuring when other, more successful bands are peddling such half-arsed rubbish. Middle tracks 'Soulflight,' and ' Ashram Of The Absolute,' are the standout tracks here for me, the former coming across like 'Planet Caravan,' ploughing head-on with 'Riders on the Storm,' while the instrumental 'Ashram...' builds gently to an uplifting finale.

It's not perfect however. There are a couple of tracks here that sound a little like filler material such as 'All Good Things (Must Come to an End),' which sounds a little like stoner-by-numbers. The vocals of Goran Florstrom also seem to be a sticking point for some. His sleazy drawl suits the style of music well, and he hits all the right notes, but the inflection he gives the words makes him sound like a stoner Liam Gallagher at times, and lets face it, no-one wants that. Personally, it wasn't that much of an issue but there've been a few people who've commented on it, so you'd be well advised to give one of the tracks on their site a try before you commit any cash.

Overall, this is a highly impressive debut and a pleasant surprise from the Gothenburg boys. Now where did I put my Zeppelin albums.....