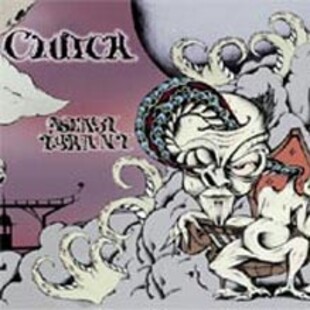 If there's one thing Clutch can't be accused of it's resting on their laurels. Throughout their 12 year career they've shown not only a level of song writing and musical skill far beyond most other contemporary rock bands, as well as a near insane addiction to touring, but also an ability to evolve and adapt their sound for each album. Just listen to the differences between the loud sing-a-long rock songs of Pure Rock Fury and the more laid back, blues orientated style of Elephant Riders. But both are still undoubtedly Clutch.

Now Blast Tyrant, their 7th major release, has arrived. It's been called Clutch's 'concept' album. This phrase is extremely misleading with regards to this album. As any fans of Neil Fallon's lyrics will know, he's a weird guy at the best of times. And Blast Tyrant is no exception. Whilst Neil claims that all the songs relate to a demon named Worm Drink fleeing the army of Blast Tyrant and his subsequent pursuit, it's quite hard to find any real cohesive links between the songs, with a few notable exceptions. But this, of course, is the idea. It's not meant to be an easy to understand fable, as with everything Clutch do, they do it with tongue firmly in cheek. The apparent story, and brilliant CD artwork, serve to mislead the listener and provide a minor interesting distraction from the main thrust of the album: the music.

So have Clutch maintained their high standards and ability to mould and morph their music? Once again this isn't an easy question to answer. Blast Tyrant is by far the most 'polished' of all the albums in terms of production. The band clearly had a sound they wanted and spent a lot of time going over and perfecting it. It works well and the B12 Hammond Organ makes a welcome entry, somehow they manage to get away with it in one of the heavier tunes on the album, Army of Bono. However, some Clutch purists may be shocked and just how produced this album is. If the production on the self-titled album makes it the poor, tough street kid with a heart of gold, then Blast Tyrant sounds like the golden wonder boy who's good and knows it. Having said that, they way their song writing has progressed it is necessary for such care to be taken over the sound now. The Hammond Organ isn't the only new entry. Clutch have gone acoustic. Well, almost. Both The Regulator and Ghost feature large amounts of acoustic guitar, mixed in with more heavy choruses. And it works. Very well. As always with Clutch, their more creative side is normally their best. Both of these songs are among the best on the album and it's nice to see that the band still have new ideas on what they can do.

Most of the other songs on the album are strong. The blistering opener Mercury, over in less than 2 minutes, is the perfect way to begin an album. The on-off drum beats, along with Fallon's staple bellowing give a good impression of what's to follow. Songs like Profits of Doom and Subtle Hustle provide the usual Clutch style, and no doubt are brilliant live. The Mob Goes Wild is 'the single' from the album, a definite sing-a-long live, and doesn't quite fit in with the rest of the album. 'Troo' fans may hate it, but everyone else will see it as a funky little tune. There are some low points, Spleen Merchant does not add anything particularly interesting into the mix, Weather Maker is a completely unnecessary 47 seconds and the instrumental, WYSIWYG is tacked on at the end for no apparent reason.

So what have Clutch achieved with this album? There's no doubt that this is an excellent album, which is the least to be expected from Clutch. This album is again unique compared to the others (listen to Fallon's howling in Worm Drink if you don't believe me) but doesn't have quite the edge that the others did. You can listen to it and enjoy it immensely, especially La Curandera (a personal favourite), but it's not going make the broad grin spread across your face in the same way that past albums have done.