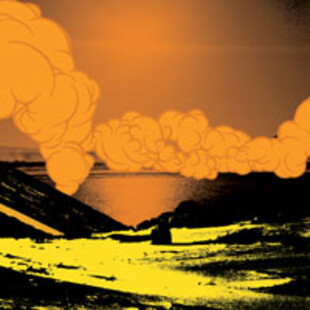 In the first few months of last year, a friend of mine kept telling me about this amazing band he'd heard, and how I had to get their EP as soon as it came out. And this band had a really silly name. Not that I'm the sort of person that would let that bother me. 'What are they like?', I enquire. 'Amazing!', I'm told. Useful. 'Well, I suppose they're a bit like Isis.' Oh, I thought. I was still struggling to get to grips with Isis at this point. I couldn't get past the feeling they were over-doing it all, somehow.

So, comes the day my friend has awaited, and I finally get to hear Pelican's Untitled EP. Not only does it blow my mind, tear my face off and show me the fundamental truth of the universe, but I also quite enjoy it. Suddenly, I find myself wondering why the hell everyone is so excited about Isis. This is what they need. Four men and the biggest riffs since Tony Iommi invented the big riff. None of this poncing about with silly noises and shouting. The song 'Mammoth' is still the heaviest thing I've ever heard on record. I like Pelican, I decide.

Fast forward a few months: I now get Isis. I have finally stopped saying Pelican shit on them from the highest of heights. Then I hear Pelican's full length debut is on its way. High noon approaches, the showdown of the Hydra Head heavyweights. Can Pelican maintain the crushing momentum of the EP, and knock their bosses of their lofty perch?

I get the album. The miniaturized LP style packaging is fantastic. My hands aren't shaking as I put the CD in the player, but they damn well should be. This could be the greatest moment in my musical life since my mate Boycey played me Iron Maiden for the first time, at the tender age of eleven. I listen. I wait to be blown away again. And it doesn't happen. Briefly contemplating suicide, I decide to give the album another listen. Still nothing. What's wrong? How have my new heroes let me down so cruelly? I am truly gutted. This is almost as upsetting as the time I dropped a whole ice cream cone on the beach at Skegness when I was six. And that was a 99. With sprinkles.

The next day, I decide I have to give it another chance. Maybe I was asking too much. You can only write one 'Mammoth', I suppose. This turned out to be one of the best decisions I've ever made, right up there with deciding to go to Alton Towers rather than vote in the last general election.

Australasia is amazing, to put it simply. It may not be as heavy as the EP, but it still has everything that made that release so stunning: the huge riffs, the straight forward simplicity of its parts coupled with the effortless sweep and grandeur of the whole. And it also has something else - call it an 'X' factor, if you like - that sends tingles down my spine in a way Untitled never quite managed. While the earlier release had an obvious stand out track, I find it very difficult to pick out any one from the flawless gestalt that is Australasia. In fact, I find it difficult to pick out where one track ends and another begins, unless I can see the display on the CD player. True, I was initially drawn to the massive groove that kicks in about three minutes into the second track, 'Drought', and there's a bit of singing saw later on that is pure magic, but this album works best when treated as a single, seamless piece of music.

It has something to appeal to just about anyone: intricately picked riffs reminiscent in parts of Master Of Puppets; big grooves worthy of the most stoned doomsters; drawn out soundscapes Neurosis would kill for; dreamy acoustic interludes; and an overall, pummeling wall of sound that every heavy band would do well to take note of. And what of the Isis question? Well, my initial comparison still stands: Pelican seem to get to the point a bit quicker, and once there, rather than wander off in search of a new one, they stay with it, forcing the listener to completely surrender their full attention for the duration.

'Genius' isn't a word that should be thrown about lightly, so I'm not about to start chucking it around with abandon. But if Pelican do have a genius, it isn't in any particular facet of what they do - there aren't any riffs that make you think, 'Shit, I could never play that!', there aren't any Mastodon style drum gymnastics. There isn't anything as clever or technical as Tool, say. But what Pelican have is the ability to make, simple, compelling music, without resorting to any trickery, gimmicks or cheap hooks (like vocals, for instance).

A famous band once jokingly put the instructions 'Listen without distraction' inside the sleeve of an album. You won't need any instructions with Australasia, it'll happen naturally.