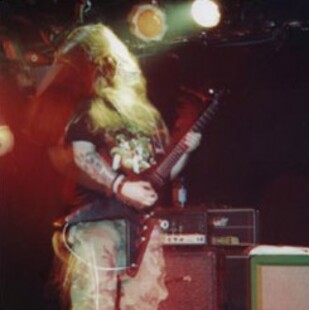 You've been around for a little while now - have you all enjoyed your three or more years in the Raiders?

I'd say for the most part yes. Playing gigs and the like is usually fun. Outside the band things may not always be so good; the loss of certain people and Seamus' tally of injuries.

Has your sound evolved over time? 'Night of the Frost' sounded like a leap forward from the demo - as I said in the review of it for ninehertz you sound more confident and assured in your own sound. Would you agree?

I guess so. When the band first started, Seamus and I had been in Evil Knievel which was more stoner orientated as the others in the bands were not into metal really. When we got Paul (Sutherland - Drums) on board we then had someone who was not afraid of a bit of Dio. Having a whole band who all liked metal (as opposed to stoner rock) meant that we could play heavier. It took a while for the band to evolve, and some of the earliest songs were started in EK. Moving to one guitar also meant that Seamus had to make sure he was playing well too!

How do the different influences (cultural, and musical - doom, metal, hardcore, crust) and pasts that each member brings effect the band's writing and general sound?

We listen to all kinds of stuff but I don't really see it's that much different. It's like the old 80s mentality; if it's heavy then it's good. As long as the riffs are good and you structure it well, you can't go too far wrong. It helps if you can play properly, but that is not always the case. Give me Hellhammer over Dream Theater any day. We like a lot of Black Metal but when we use BM riffs people don't usually spot it because we still play it with our style. I'm not sure how much cultural issues affect the band, perhaps it's not obvious to those on the inside but others may be able to spot it. I tend to keep the riffs simple as that's what I prefer to listen to. If I want fills and fancy runs I've got a good rhythm section to do that for me. Riffs should be hooks, not exercises.

You've only released the 'For the Sake of Clarity' demo and the split 12" with Among the Missing so far - is their any music in the pipeline to be released? Any label interest?

The 12" has been re-released with some extra live tracks and we just finishing off the album which should be out in Autumn on Invada records (Atavist/Gonga etc). There are a couple of tracks left over so maybe a couple of splits too? Probably one with Sourvein and then we'll ask around.

What are your ambitions for the band? While you'd obviously want more, would you be happy if you were to remain at the level you are at now, with the obvious respect you have earned in "doom circles" and the raucous live performances, often in the support of "big" name touring bands? Is there a grand plan?

No real grand plan as such but when the album comes out in the Autumn we'll try and do some shows and hopefully a tour in the new year. I want to play big gigs. There's nothing better than getting a good reaction from the crowd. We'll take it as it comes - we won't have a marketing budget and stylists just yet.

Al - how did you come to play bass for Sourvein on their UK tour with Ramesses? How did it go?

Troy got in to touch and asked me. He knew people who knew me and got their opinions too I think (Podge, Bumsnogger drummer and Calculon Records boss, for one). Liz Buckingham thought it was funny; she said I better not be playing any of her riffs. The tour was fun. Some turnouts weren't great but then some were. I've known Adam for about 15 years and Mark since he joined Wizard so it was fine. Gary who was filling in on guitar for Tim was really cool so it was easy enough for us. And the 'veins were cool guys so it was killer. 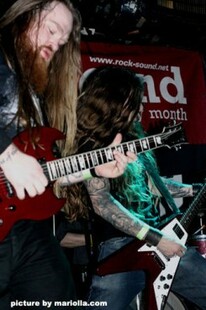 While you have played outside the capital (Sheffield, Barrow, Hitchin spring to mind), and with the exception of the mini-Scissorfight tour this year, you've managed to support some of the biggest names in stoner and doom in London but not really elsewhere. Have you thought about touring the UK (or for that matter Europe and beyond) on your own?

Is this something you are aiming to rectify? Once the album comes out then we'll be playing again. And yes, we'd like to play Europe. We did a couple of shows in South Africa while back which was cool and I've toured Europe working for bands so I can't wait to see what they make of us. Touring costs money so we need to plan it riught so we don't get in debt.

What I like about the Blood Island Raiders is how you are a very "metal" style band - from the lyrics and influences to the Viking cover of 'Blessed Are the Dead' - yet do so without sounding or coming across like some tired old band hanging on to an old ideal without anything new to play or say - not to mention without irony or cheesiness. Fair comment would you say?

Wait til you see the album cover! There's no question of it being ironic - I've listened to this sort of music for 2 decades. This is what we love. I've grown up listening to Maiden and WASP and Saxon. I still listen to it now and I still love it. The thing with personal lyrics is you have to have something to say to make it work. Wino has something to say, some haircut/Nigel band saying they're angry cos that's what some other band said? It says nothing to me. I'll take the Conan lyrics over 'boo hoo, my parents are divorced' anyday. For the longest time it's not been cool to like metal but that's changing now. I see loads of young kids - 11-12 year olds - in Maiden shirts which was me 20 something years ago. Back when in the early 90s it wasn't cool to like Sabbath and us doomsters (there was about three of us in London) would say this is the real thing; people would say "nah that's shit listen to Pantera". Of course Pantera would say Sabbath is the real thing too. But it took a while for people to sus that.

While your influences from the metal and doom classics are more known, who currently gets you excited? Any lesser-known UK bands we should all be keeping an ear out for?

I'm not really up to speed on the UK underground anymore. I buy so much old stuff. Iron Hearse I presume will be well known. I heard a great demo by a band called the Shook from London who where very Obsessed-like but I've no idea what happened to them. The Heathen Hoof ep is killer NWOBHM stuff and the Isen Torr 10" from a couple of years back was great.

And to end on a daft question: if you could pick your own all-dayer of bands past and present, large and small, who would be on it?

It's a start at least.

Visit the Blood Island Raiders website by clicking here. For copies of the 'Blessed Are The Dead' vinyl or CD release go to the Withered Hand Records website, linked here.