Taint The End Of All The Shit

Despite recently reaching their ten year milestone, Welsh cult rock band Taint are not resting on their laurels. With a European and UK tour just completed, Taint have a new album, 'The Ruin of Novà Roma', recorded and due for release soon. ninehertz got in touch with Jim from the band to catch the mood in the camp.

I suppose the right place to start is with 'The Ruin of Novà Roma'. When is it due out? How has your sound evolved from past releases?

Jim: There's still no definite release date for the album. We're still talking to a few labels about releasing it, so we need to be sure that we go with the one that we feel will represent our music in the best way. I still believe that certain labels may not know what to 'do' with us, due to the music we play. It's important for us to have this record reach all of the people that we play to. We have a definite musical cross section of followers, and I wouldn't want a label to exclude a certain group by 'selling' us to a certain 'market'. Ugh, I used two rather dirty words there.

Our musical direction has evolved in a gradual way I think. It's been a few years since we recorded our songs for the split with Black Eye Riot, and in that time we made a few decisions. Firstly, Stophe decided to leave the band, as he took it as far as he wanted to go. Secondly, Chris joined and brought his more percussive style of playing with him, and thirdly I decided that we should tune up from B to C. I was getting sick of playing with flappy strings and a lack of clarity. This has ended up with more taut sounding songs, a generally punchier delivery of riffs, more melody and myself becoming a much better guitar player. I also think it's broadened the options of what we can write, so I'm glad we're able to step further away musically from the usual 'sludge' or 'stoner' references. I know that some of our sound is rooted in those areas, but I think we're transcending them to an extent, and even going back further to the roots of rock music. One of my all time favourite bands is Led Zeppelin, and I think more of their influence is coming through all the more in our music these days.

The album is to be mixed by Alex Newport, of Fudge Tunnel and Nailbomb fame. How did this come about? Has the delay this has caused been frustrating?

J: Having Alex mix the album came about purely by me emailing him, and him agreeing to do it. He looked at our site and checked out our mp3s, and told us that he's into what we do. I explained to him that I'm a long time Fudge Tunnel fan, and that they are one of my base influences when it comes to heavy guitar music. Later on we also sent a live DVD of us playing a benefit show in Newport TJ's, which was recorded on the last night of the album session, so he could see how we are live.

The delay has been very frustrating; I'll have to admit that. We also understand though, as the reason behind the delay is down to Alex. He mixed this album for a very modest fee, because he knows that we're a D.I.Y. band and that we were paying out of our own pockets. He also digs the music so he expressed that he wanted to be involved, and wanted to help us out. Alex had to put us on the back burner to some extent though, as he had to prioritise other projects that he had on around the same time. 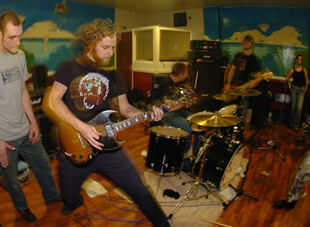 What does the name of the album refer to?

J: 'The Ruin of Novà Roma' is really just a grand way of saying "the end of all the shit". 'Novà' is Czech for new, and 'Roma' is of course Rome. I just love the simple metaphor of contemporary society being described as very 'Roman'. So the title is saying that we should end this 'new Roman' lifestyle. There's so much greed and exploitation in the world that it really can be comparable to the gluttony and barbarity of the ancient Roman empire. When the album finally comes out, the packaging and lyrics will tie in with the title even more

You've got upcoming tours with Army of Flying Robots in Europe and Art of Burning Water in the UK. Have you toured Europe before?

J: We?ve just got back from the tour, and we've had a really great time. It was our first time in Europe, so it was a big thing for us to cross the sea and get off this shitty Island. We met so many great characters and kind, welcoming people.

You seem to get branded with the stoner rock tag a lot, yet play a lot of gigs with hardcore bands - the Army of Flying Robots tour is a good example, as well as the split with Black Eye Riot. Is this something you consciously try to do, or is it a necessity because of the supporting network of that genre?

J: We do get branded with the stoner rock tag, and it's actually getting to me at the moment. I wouldn't mind so much if certain people weren't so fickle with which bands they'll give a chance to though. I've seen people leave gigs early when they think that some 'Kyuss meets Iron Monkey' (to quote a recent flyer) sounding band is playing last. I love those two bands, but I'd say we owe just as much to Fugazi and Shellac in our sound and influences. I think that 'stoner rock' as a genre can end up being completely un-challenging, just as a generic tough-guy hardcore band can be. I feel we're pushing ourselves musically and artistically, and I don't feel that we belong in any one, exclusive genre-bracket.

We don't make a conscious effort to play or release records with hardcore bands. We just like to do things with natural friends and like-minded people. I do think our approach to the music that we play, and a lot of the vocal/lyrical delivery is rooted in hardcore though to an extent. We do things in a totally D.I.Y. way too, and so yes, that invariably leads to us playing gigs with D.I.Y. hardcore bands. We also do gigs with D.I.Y. bands that play stoner rock, death metal, post-rock, drone etc. Hardcore, metal and rock have always crossed over. It's where your head's at more than anything.

On the other hand, you've played the Kingston Peel all-dayer recently with the likes of Orange Goblin and Alabama Thunderpussy. Is this something you enjoyed?

J: That was a great show actually. The Goblin guys treat us like family and there's a big mutual respect between the two bands. It was also great to come home and play to such a good crowd after having a few bad turn outs in Europe.

What music do you listen to now? What UK bands excite you at the moment?

J: I still listen to all sorts of music. I?m currently enjoying NoMeansNo, someone who I should have been into years ago! Also The Mahavishnu Orchestra and the new Cursed album. UK bands that are flicking my bean are: Art of Burning Water - who's new stuff slays, Capricorns, Army of Flying Robots - who are constantly evolving, and a new South Wales band called The Death of Her Money. I think all of these people are honest music makers.

You recently reached your tenth anniversary as a band. Has it been a happy decade for you? How have Taint changed over the years? Are you happy with the progress you have made?

J: A happy decade? Well, life has its ups and downs so I guess it's been like your average person's decade. We're more active now than we've ever been as a band, so until 2002, when the Black Eye Riot split was released, we were much less known than we are now. I'm very glad that we spent our formative years pretty much unknown, as the demo cassettes that we put from '95 to '97 allowed us to evolve without any outside pressure. I guess we weren't completely unknown then though, as we had a few favourable reviews from some metal fanzines. This led to getting letters from music fans in Columbia, USA, Japan and Switzerland. That still blows my mind now. Our progress has been slow, but I think it's allowed us to steer clear of the temptation to jump onto any trends. Being stuck in Swansea in the early years, and then being spread Cardiff/Bristol/Birmingham has been good and bad in aiding our evolution.